Notes from the VP Tour of Regency Somerset 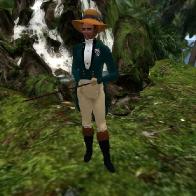 1. Welcome to Regency Somerset, in Argyle Antiquity, SL.It is the year 1814, andRegency Somerset depicts the land ofthe Bristol Seaport of Port Austen, the social scene and spa at Bath, and the County of Somerset during the English Regency.

2. This is the time period of the reign of the Prince-Regent George the IV, Prince of Wales, who holds the throne for his ailing father King George the III,and of Beau Brummel who is setting male style as the leader of the fashion Dandies and is a good friend of the Prince. Beethoven and Schubert are composing music, and a Classical Revival has influenced design, both in architecture and clothing. The newly-published Pride & Prejudice is all the rage among novel readers, whose mysterious author in later years would be known to be Jane Austen.

3. Politically,Lord Liverpool, head of the Tory party, is now leading the English government. TheEmperor Napoleon of France is creating havoc in Europe, though the Duke of Wellington is having success against the French in the Peninsula of Spain. We are still a year before from the later famous Battle of Waterloo.

4. This is the world of the English Regency.

5. Because of the conflict in Europe, people the well-heeled of Britain cannot travel to the spas and coast of Europe, and so look to develop there own recreational resources. The Ancient town of Bath, with its Roman ruins and hot springs, become the place to go for one's health, and to see and be seen. Architects John Woods Sr. and John Woods Jr., assisted byThe Master of the Baths,Richard Beau Nash,designed and supervised many of the iconic buildings in their Neo-Classical Revival/Palladian architecturestyle, resulting in the Pump Room, the Assembly Room, the Circus and Royal Crescent,and the Florentine-style Pulteney Bridge

6. We have here our version of the Royal Crescent,started in 1767 bySir. John Woods the Younger. Among it many residents, were at one time the Prince of Wales, the Prince Fredrick of York. Ours has the feel, but is a bit smaller that the Original (we have 6 town house, the RL version has 32).

6. Directly across from the Royal Crescent is Burton Green, a open space which offers views down to the River Avon.

7. Two of Jane Austens novels, `Northanger Abbey and `Persuasion, are partly set inRegency Bath and give a good picture of the social life there. Box Hill in 'Emma' is a favorite picnic site to the East of Bath in the hills. Our Box Hill is set across from the Crescent.

8. To the side of the Crescent is a Box Hedge Maze, a popular garden feature of the era, and the Estates Gardens of Somerset and Devonshire are famous for these. Behind that, as it was in those days, is grazing land and farm land because the Royal Crescent was built in what was called the Upper City, and represents the end of town. Farming and Mining are mainstays of this part of the country.

9 Now heading up the hill we come across a Folly, built after a Roman Temple. It serves here as the local leading Library and Welcome Center.

10. Then as we descend to the sea, we have an Orangery. These elegant green houses were popular during this era for growing citrus indoors.

11. People who could afford these like to show them off, and would have teas and discussions in them. In ours we have tables and chairs and musical instruments, a nice place to sit and relax.

12. Out on the point we see a round tower known as a 'Martello Tower'. There where 198 of these built between 1793 and 1803 along the Southern cost of Britain to defend against a French Invasion.

13. From here we look out on Port Austen. It is based partially on the coastal town of Lyme Regis at the border between Devon and Dorset on the England's Jurassic Coast. The harbor wall there, known as "The Cobb", is featured in Jane Austen's novel 'Persuasion'and in 'The French Lieutenant's Woman', a novel by British writerJohn Fowle. The other English harbor we used as a model is Porkerris in Cornwall (to the West of the Bristol Channel)

14. Facing the Harbor along the stone walk of the cay is the shopping district.

15. The Stone Cay is a lovely promenade to stroll on, or to sit and watch the waves, the sea gulls, and the sunsets. Overlooking the harbor in Port Austen we have a number of wonderful shops which provide an exciting regency shopping experience. Please do take time to come by and see them. The shops include:

Cherie House of Design by Joandarc Ninetails, No. 23 Port Austen.

The Music Box by Cara Cali, No. 14 Port Austen

16. Our final stops on the tour are the Nelsons Blood Tavern and the Trafalgar Arms Inn.

17. A Tavern is far more than a Bar in this era. It is a center of community where the news of the day is exchanged, where people eat, where visitors first stop, where stories are told, and dances are held.

18. Nelsons Blood is based on photographs of hundreds of taverns in the South of England and Cornwall. It built to look and feel like one. Items are hung on the wall. A nice fire to warm one self by and hot food served from the kitchen. It also the stop for the Royal Mail Stage, and in the Mews out back one can mount your horse or rent one, or catch the Omnibus.

19. Up above the tavern is the Trafalgar Arms Inn.

20. Built to service the carriage trade, the Trafalgar Arms offers finer dinning without the need to mix with the lower classesand provides clean rooms. Many come and stay for the season.

21. This little creation is actually one of my favorites, Because of the way the English channel and the Bristol Channel act as funnels, capturing storm surges from the Atlantic they get huge tide and storm surges ( the phrase Ship-shape and Bristol fashion, refers to a ship able to stand the storms and a hull which can be left high and dry at low tide, and still be seaworthy.)

So we created an estuary where the fresh waters and seawaters mix, where birds live and wiled grasses grow. It makes for Lovely pictures.

22. The Builders: I receive a Lots of praise on this sim, but really, it not me, I am simply the Conductor of a really Great Orchestra, I chose the music, we talk about how to preform it, how it will fit in to the space and the time allotted, they create, I critique. I really own a great deal of thanks to them, the unseen creators of Regency Somerset.

23. How we design, well, it is collaborative, we start by talking about what we think we need, or is missing, we have a Pintrest account, where we each go thru and fine pictures and painting of the subject we looking to create. So we have a page on Regency Hair, Regency Clothing -Womens, Men. The Roman Baths in Bath, The Royal Crescent, the Landscapes and Garden. Country Fairs. Seaside resorts. Ports and Harbors. Pubs and taverns. Inns, Shops Lyme-Regis, .. We then compare notes and talk about it.

So theyre a lot of research that goes in to it.

I when thru a lot of discussions early on, I first wanted to do exact reproductions, but what I learned was to try and capture the spirit, the feeling was more Important.

What we have is, the world of Jane Austen, it not the drudgery of the working classes, it not the glitzed of the high nobility, it is the Middle gentry as described in her books.

24. How did Regency Somerset come to be.

Well, the Regency era all ways been fascinating to me, and when I first came to SL, I was surprised to fine that there was No Regency sim.

As time went on, I meet more and Moor people in SL, with such Interest. Jane Austen Book Club, Jane Austen Fans, Napoleonic Association, Friends of the English Regency, Georgian Roll play Theyre plenty of Interest inn the Regency era, just no one group or place. A group was formed, which came to be known as the 1800Project, which was to bring all the groups and Interest together to build a sim. Well, for various reasons, that fell apart, but I continued with the ideas we talk about in those meetings.

25. I hope you've enjoyed your tour and will come to visit us often. If you'd like to stay abreast of events I can offer your membership in the Regency-Somerset group. We would also welcome student groups and other educational activities. So please do contact me if you would like to use our facilities here for your teaching.