After an early evening meal, I planned to walk to my old retreat; a small structure just south of the main house on the hillside that, at one time, may have been a small orangery. It was a cool evening but I chose to continue on rather than go back for a shawl. Climbing the old stone steps to the surface of the hill and entering, I saw the chaise no worse for the wear, and settled back onto it, looking about.

There were canvases stacked against the far wall, untouched by paint or brush, and the plaster was peeling in places. The evening sun made the dusty windows almost ethereal, and a small spider spun its web in a ceiling corner. I had asked that some refreshment be brought up. Wine and some fruit were laid out on the old wood table.

Rising and walking over, I ran my hand over the surface. So old and weathered, so smooth from the daily beating of the sun. My hand rested on a plum and then retreated. I regarded the fruit and thought of all who may have shared this moment who were no longer with me. My dear Papa; the loss of his humor and protection left a gaping hole in my heart. Mama, whose sweetness and undying love for her family were both her shield and her sword. And my Gianni. I sighed aloud "... oh, dearheart"

I stood there, regarding all that had occurred, all that I had endured, and still, what was that compared to the suffering of the world? A small speck of paint on a far larger canvas. But what was I, a lone woman, to do about all of that? I could, in truth, only tend to my own affairs.

The time drew long like an evening shadow, and I stood there, silent and unmoving, while thoughts, memories and regrets marched through my mind like an invading army. The matter of Edward, and my foolish belief in him, the Baron and his treachery, and the Earl, which I had at one time regarded as a lost opportunity but now found just as well left undone.

The last of the daylight was slipping out the window like a thief and I realized, while I stood in front of these empty canvases, and this bowl of untouched fruit, that I was, in fact, a still life. No movement, no momentum. No mission, no achievement.  I was an adornment. First to be painted, then framed and hung on a wall. I had no need of a husband, but longed for the companionship. I wanted for nothing, yet yearned for a goal.

Again, my fingertips gently brushed the old wood table, "perhaps it's enough to be what we are."

The sound of my own voice startled me back into reality and I pulled the soft blanket from the chaise, wrapping it around my shoulders and walked to the doorway. After glancing back, I stepped through and descended the stairs, committed to adding some motion to my life. 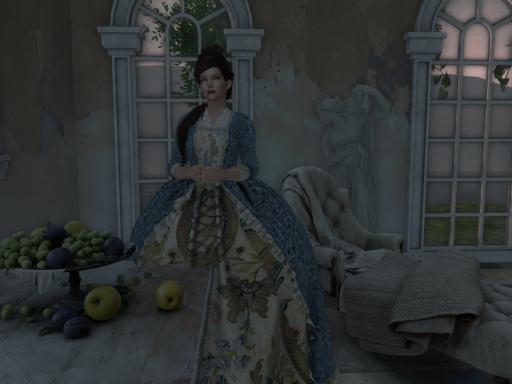