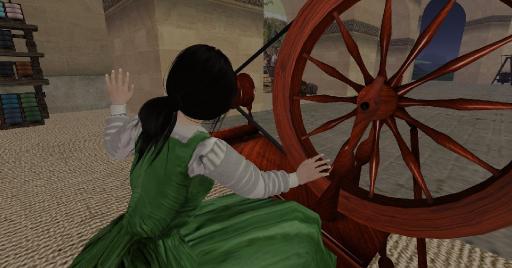 
Background information http://en.wikipedia.org/wiki/Kirishitan http://en.wikipedia.org/wiki/Kuge I've long tried to reconcile my Japanese name and appearance with a place at the French court, and I think i have found a way now. Since the court is now set at 1660, it would not be impossible for Nakamura Satoharu and her family to have fled Japan with the Catholic missionaries between the years of 1614 - 1630. Unlikely, yes. But not impossible.So now Mademoiselle Satoharu is descended from a kuge family that converted to Christianity. To escape being forced to renounce their faith, their family fled with the Western missionaries. Kuge at this time were politically and economicly weak, but maintained their rank and privilieges when at the Imperial court. They focused their attention on fashion, poetry, ritual, and court politics. One of that class would be perfectly suited to the life of a courtier, I should think!From what I've read, the Spainish court seemed severe, so I doubt the Nakamura family would have desired to remain either there or Portugal. And 45-30 years in France would certainly allow plenty of time for the Nakamura family to learn French fluently and manage to attain some level of rank, if only as a curiosity from the far East.Her father wants her to either become a nun or marry a good Japanese boy. But since the only good Japanese boys were halfway across the world, I suppose Lord Nakamura will just have to settle with a Frenchman.~~~~~~~~~~~~~~~~~~~~~~~~~~ Biography I was born in 1640, the daughter of Nakamura Takurou and Getsube Okiku. This year of our Lord 1660, I am 20 years old. My mother Getsube Okiku was born in 1617, in Japan. My father Nakamura Takurou was born in 1605, also in Japan. They were promised to each other when Mother was born. In 1626, when it was crystal clear that the Tokugawa shogun would not tolerate Christianity within Japan, Takurou asked the Getsube for the permission to bring his young fiancee with him when he fled with the Portuguese missionaries. They gave permission, as long as he brought a suitable number of attendants for her. A group of about 25 Japanese travelled, including the young couple, his parents and older sister, and servants, some who had served her family. They landed in Portugal, but decided they preferred the culture of France.I was born in this country, and grew up speaking both my native tongue and French. In Japan, my family were kuge, nobility of high enough rank to serve the emperor directly. Naturally, father did not expect to be given high rank immediately in a foriegn land, but we hope to earn a rank that fits with our high rank in Japan. My mother brought with her a small mulberry sapling and a few silk worms. Three of the servants she brought were trained in sericulture, and one of them was qualified to weave. It was on the backs of those four servants that the Nakamura family made money in France. With that money, Father bought a barony off of some particularly desitute nobleman. The family bought some land near Sevre, and a small silk farm is located in that country estate.My aunt manages the estate. Since she left Japan, there wasn't anyone for her to marry. Grandfather died when I was a little girl, but Grandmother still lives in the family home. Auntie tends to her. As for me, Father would like me to marry a good Japanese man, but the only ones we know of are servants, and how would that look for his only daughter to marry one of her servants? He does not want me to marry a European, but that might be how it will have to happen. Already some of the servants have taken white husbands or wives, though there was one match between a Japanese porter and one of the sericulturists.My father, the lowly Baron Nakamura, is determined that I will bring esteem to our family name. My younger brother might have a chance of bringing honor to us, but his hand in marriage cannot be bargained away in the same way mine could be. Therefore, he sends me to court with the hopes of attracting some gentleman of higher rank and wealth. I am glad that the fate of our family does not rest in my hand alone, or the pressure would be unbearable.(I orginally posted this in the old Royal Courts ning site. Thank goodness I saved a copy to my computer!)