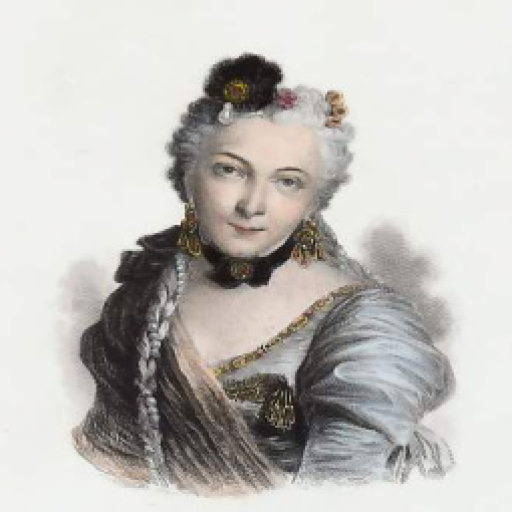 thank you for taking an interest in this blog which was started by me, the comtesse de Noailles aka MJ, with the purpose to inform those interested about my journey to the far far east, the People's Republic of China.

First of all, let me explain to you my motivation to leave Europe and move to such a remote country as China. It has been my wish and dream for a while to take a break from my "normal" life in Germany, the daily routine, everything seemed to bore me and grew even more tiresome every day. A trip abroad came to mind first...but I did not think of China...I wanted to do what I always had in mind. To live and work in a museum in France, my favourite country in Europe. Everything seemed to work out - a lot of effort went into my application which was nearly 50 pages long (including documents and degrees, German and French version). Although the leader of the organisation who was supposed to organize the trip to Verdun where I would have worked in the Centre de la Paix had assured me that my application was by far the best the leaders of the museum decided to give a French student a chance...I received these news on my rl birthday. I was desperate and frustrated...given that I had spent so much time on this letter I was clearly disappointed. I tried to get in touch with another museum in the north - even no reply.

I actually wanted to give up at this point. I was sick and tired of writing applications nobody would even read. That was when I read about a project that had existed for several years...IN CHINA. They were in need of foreigner from Europe who speak English and would love to teach it at a middle school. This was my chance! I signed up for it immediately, went to a meeting, talked to the members of the organization, handed in my application - voil - I have lived here for more than 2 weeks and get used to the people's lifestyle step by step.

But let's start a bit earlier...

My flight to china went from Frankfurt to HongKong on the 30th August. Me and some other motivated teachers from Germany were to spend a few days in HongKong in order to "get used to the Chinese experience". I could harldy imagine how this could be challenging. I always envisioned HongKong as a high technology city - if you look at the photos of the skyline you really get that impression...So well we arrived in HongKong after an exhausting 12 hours flight...with bad food and very entertaining Chinese woman who sat next to me (at the beginning of the flight she took out her inflatable pillow that she would wear like a toby collar...and she NEVER took it off...even when she went to the toilet, she actually ate her food with it. Just SO hilarious, and she SNORED).

Considering that I was pretty jet lagged I was really looking forward to my bed...we got on the airport shuttle which drove us right to the city centre...underground. It was so cool I could not imagine how HOT it would be outside. When we got off the tube station to locate our hostel...that was literally like a slap in my face...the climate, the smell, the people and the buildings. Culture clash. Within a few seconds my image of China as a highly developped country had vanished!

Well, It is not like I expected really clean streets or houses...but frankly, there is a difference between what you see on photos and reality. reality stinks and its noisy.

Nonetheless, we spent a few lovely days in this city and could not wait to see the rest of the country. We hoped our flats would look like this top rated hostel in HongKong...BIG MISTAKE.

We arrived in Liuzhou, Guangxi in the middle of the night, stiffling air and many Chinese people who apparently spoke NO english and NEVER saw any human ebing with white skin and blonde hair!

The first night in my flat was just shocking for me..we had to deal with cockroaches, mosquitos and many more insects. I really wondered if I would be able to live in these conditions for a year. I expected dirt and this sort of climate...but at the point I realised what it actually means to leave behind your homecountry and your culture. I felt lost and lonely. No telephone, no internet and no way to get in touch with my loved ones and friends. What a start! I decided to go to bed and have some sweet dreams...

After a few minutes I felt something prickling along my feet and my legs....I removed the blankets and there were like 5 mosquitos and a few insects I have never seen in my life before! I screamed and hit them with one of those heavy travel guides until they seemed fairly dead...the next day my body was covered by dozen mosquito stings...what a lovely start I thought. 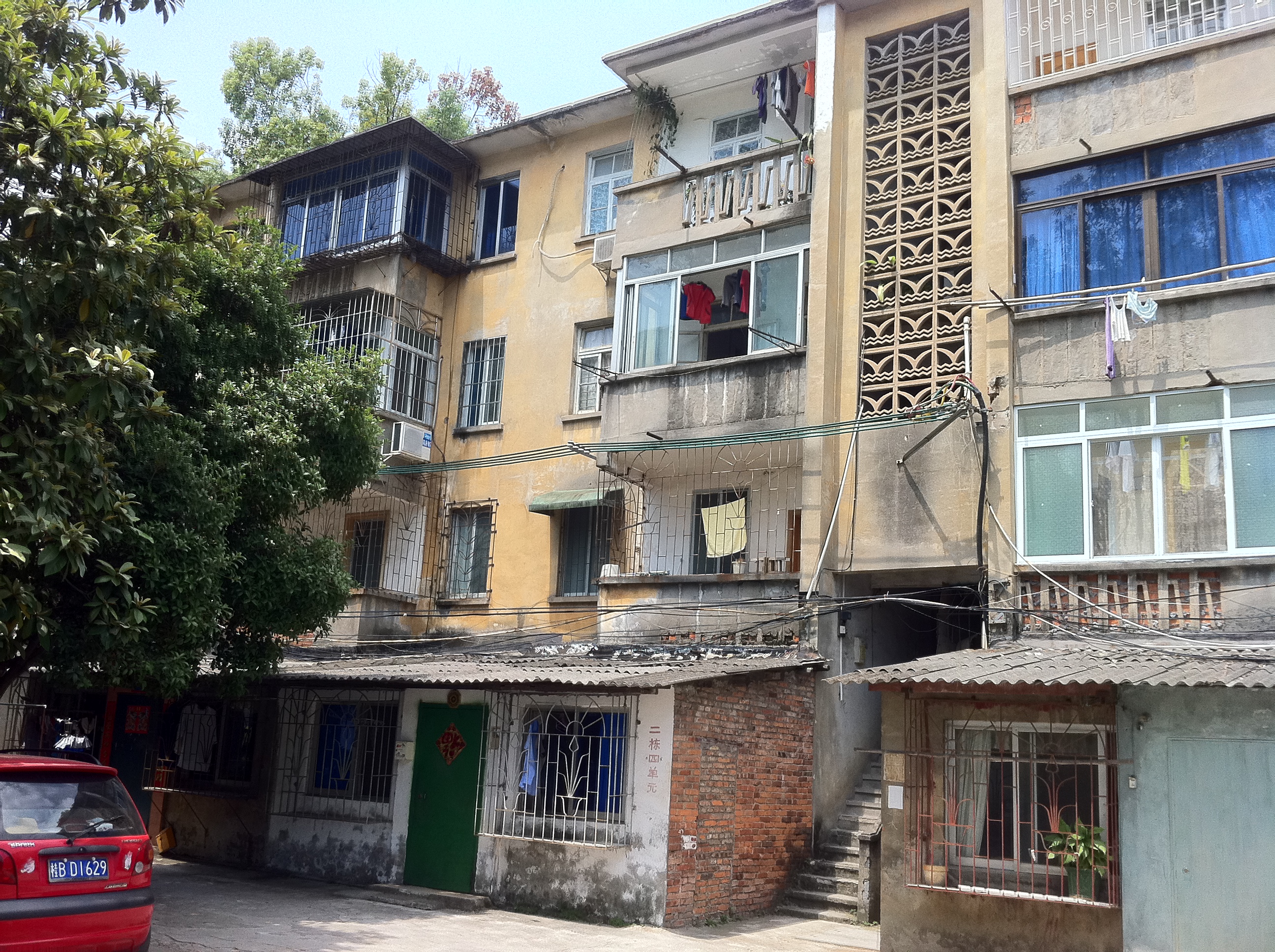 The house i am living in, the yellow towel is mine!

The following days were equally stressful...It took me a week to get used to the city and the environment. I am stunned by how well these people manage to live in this chaos...It really is human chaos. As a pedestrian you are not even safe on one of the pavements...motorbikes have got priority A anywshere you go.

There are also good news. I met a few Chinese people of my age who now consider me their friend...they invited me for dinners and one of them even to her wedding party!

The work at school is quite harsh but fun, considering that I deal with huge classes it is still very easy

but I might get a mic like some other teachers, else I will lose my voice within a week

I plan on going to a lovely village this weekend to dicover the sheer beauty of this province...so more to come soon!

There are still so many things I would like to write down and capture for you. Please just ask if you're curious. I will upload more photos soon as well, it just takes ages for them to load 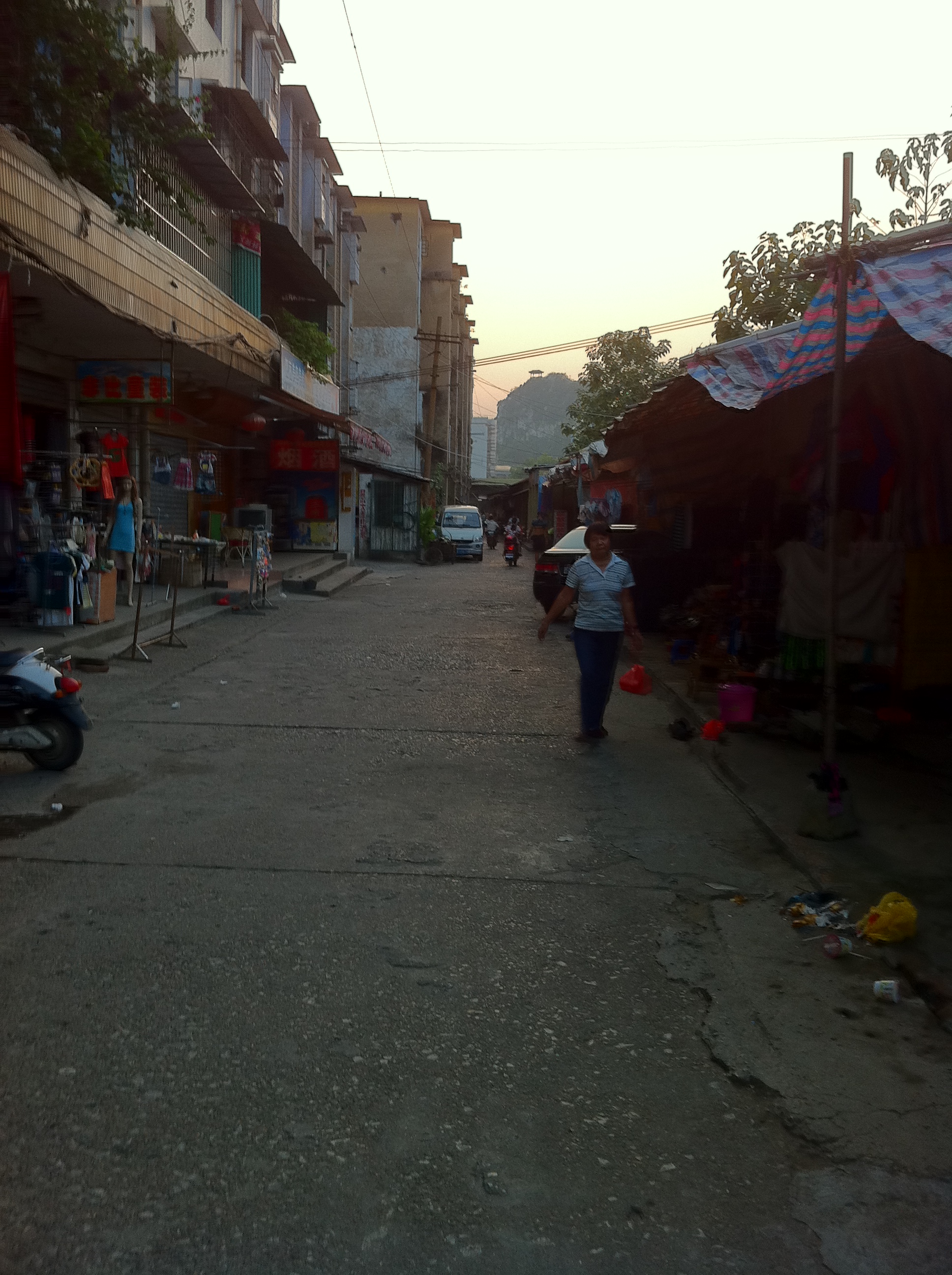 On my way home from the supermarket 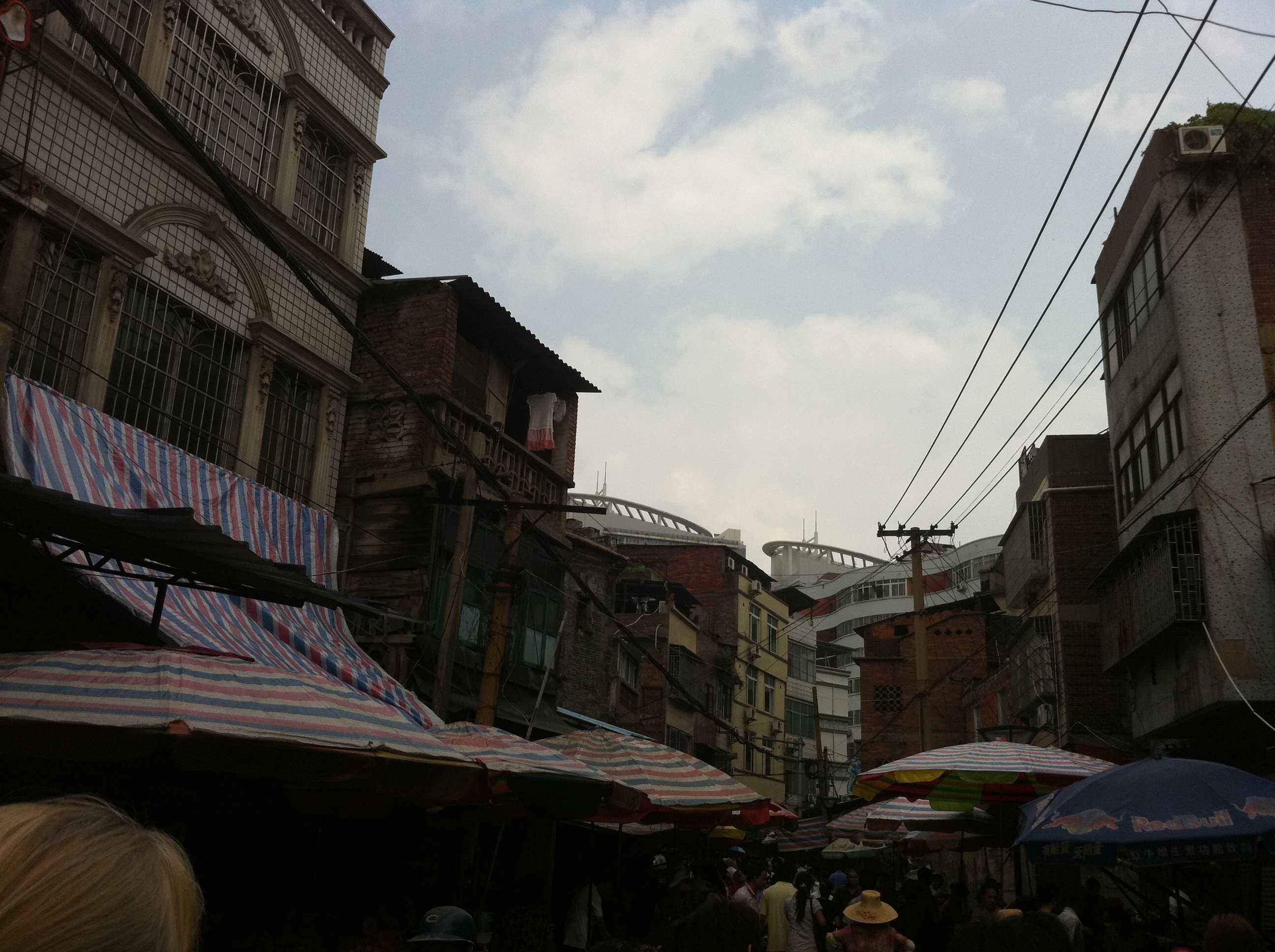 got lost and ended up here :D 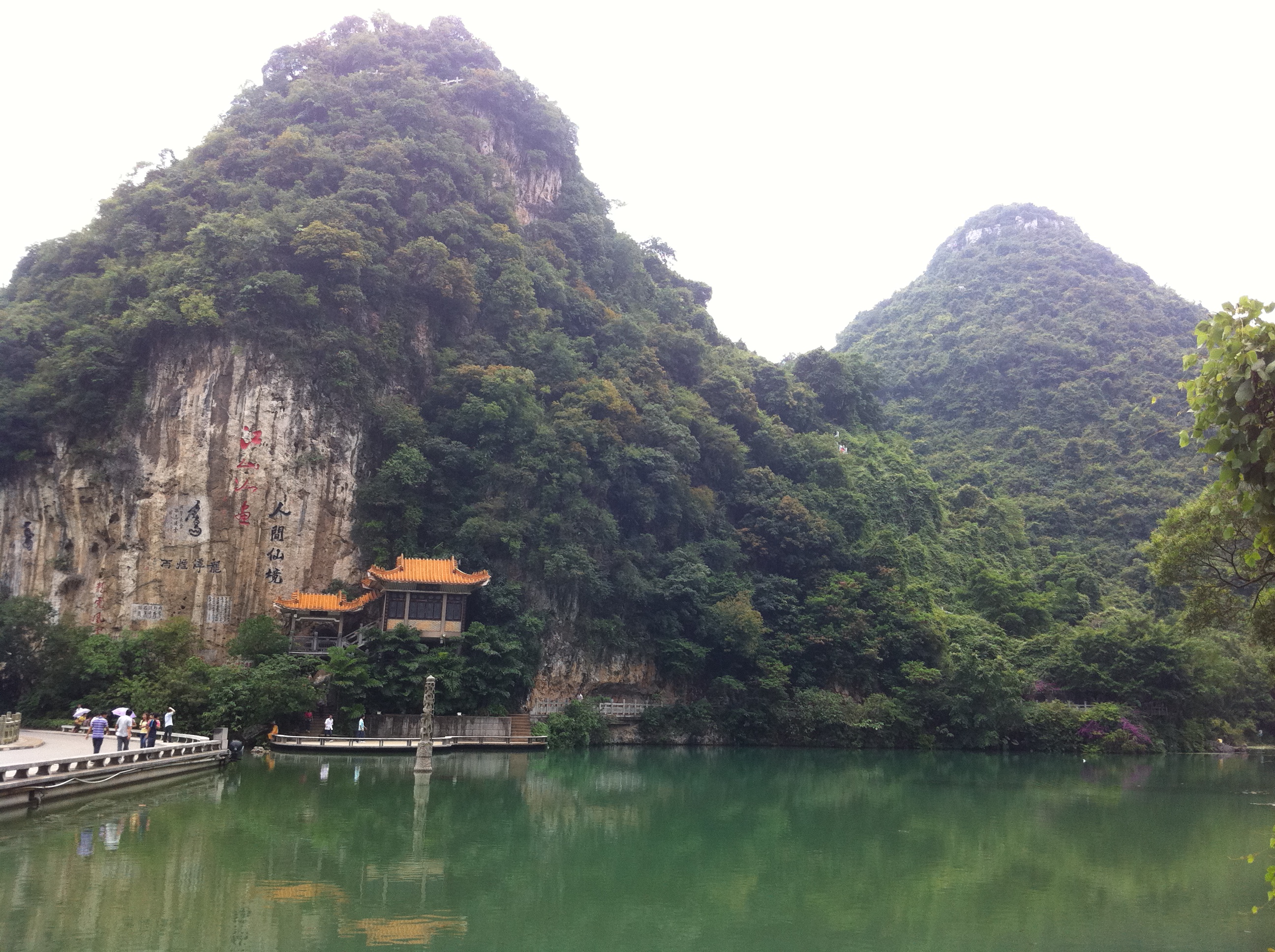 One of the beautiful sides of the city I live in....a nature park in the city centre!!

15/09/2011: Second day at school was quite a success though teaching is difficult at times; classes range between 70 and 80 students. Tomorrow I have got 4 classes and then I am off for the weekend. I will go to Yangshuo...a beautiful region known for its high peaks and the river Li. Going to post photos upon my return on sunday!

20/09/2011: W hat an amazing weekend in the northern part of Guangxi! We went to Guilin by bus, stayed there for a night and then continued our journey to Yangshuo on a bamboo boat! Here we have the pictures! In Yangshuo we did an amazing bike tour, it rained like hell and I was not able to take pictures 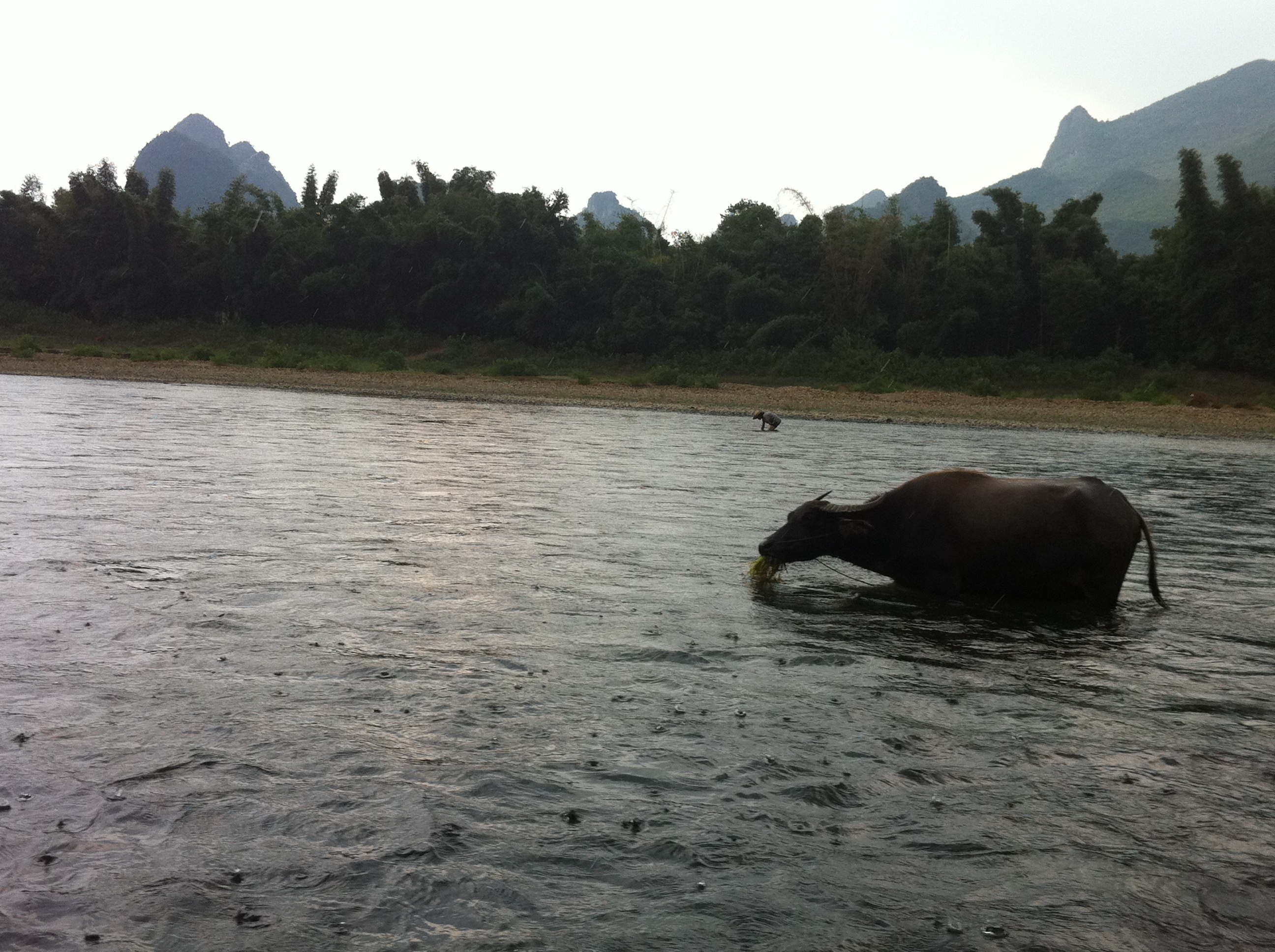 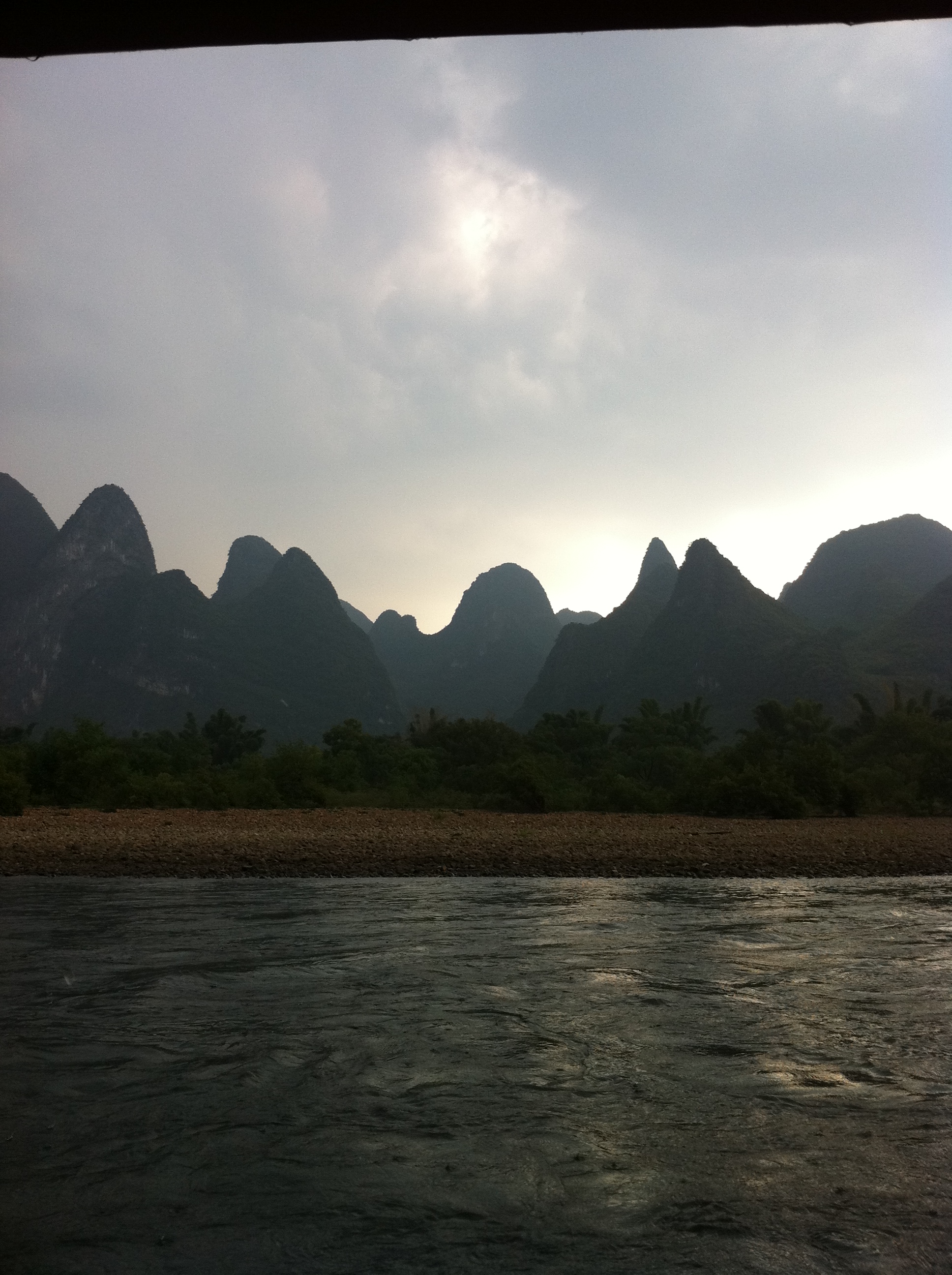 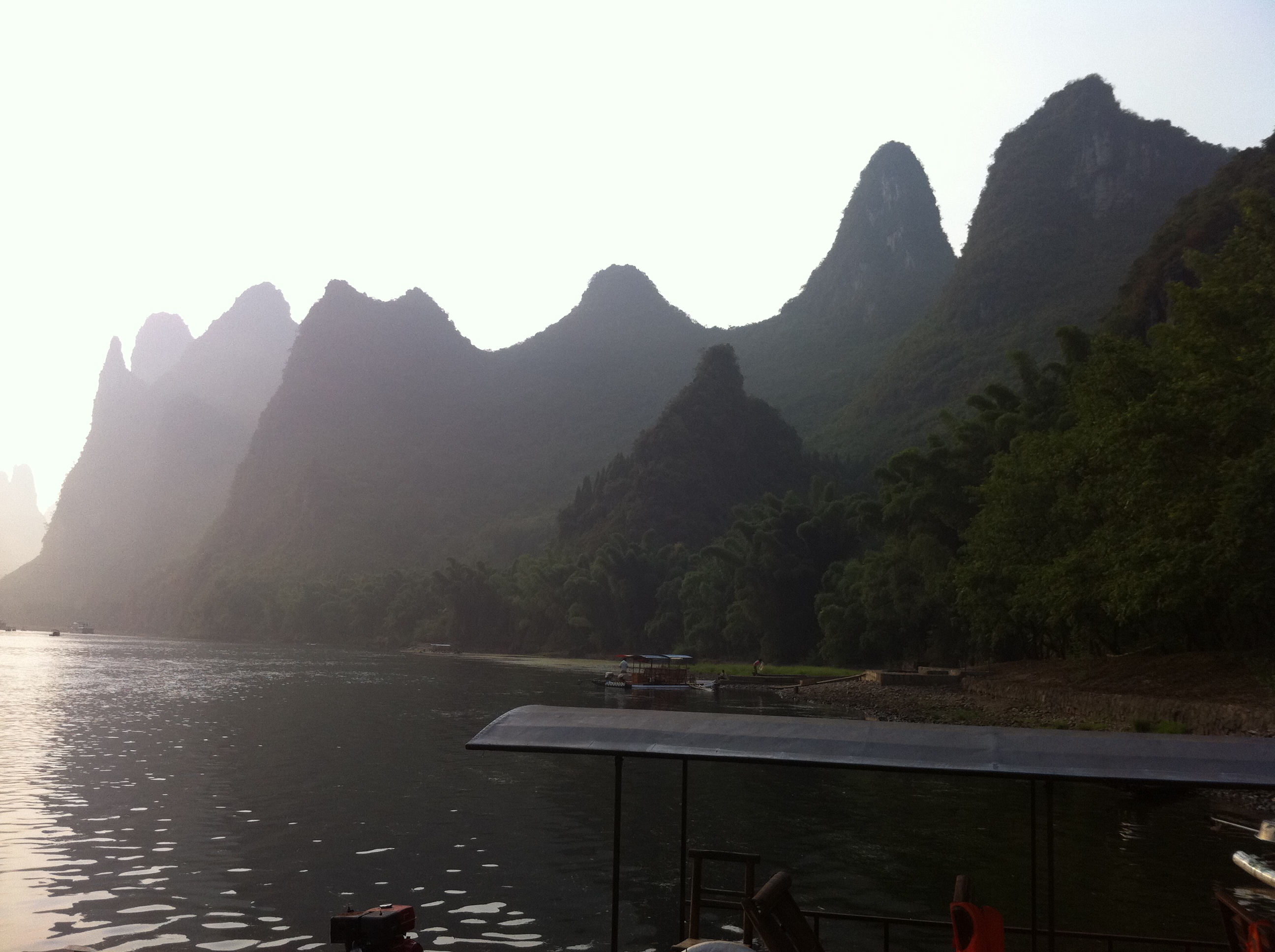 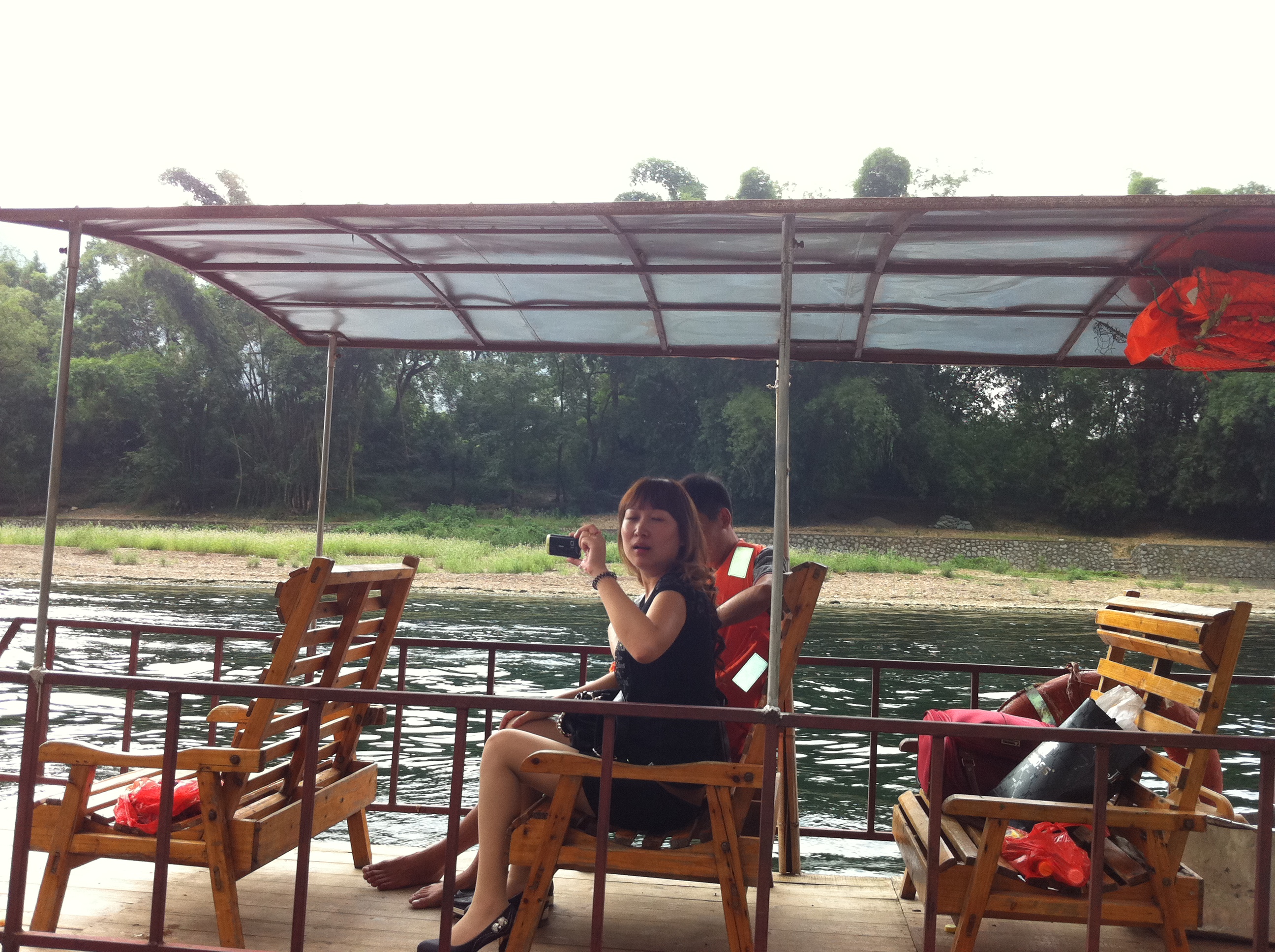 you wanna film me huh?? take THAT

I decided to visit some friends in Nanning, the largest city in Guangxi and at the same time its provincial capital! Despite the rain we were able to take a tour to the lovely village Yangmei that is known for its overall rural and historical charm - it breathes the spirit of a long gone old china! Unfortunately, we were compelled to spend most of the time at home where we were safe from the unyielding rain that would last for more than 5 days

Oh and the other we went to the provincial museum to have a look at its tunning collection of porcelain from the various periods....The vases and bowls from the Qing dynasty are surely significant accounts of this country's excellent craftmanship! No photos unfortunately!

We also went to a French ptisserie - owned by a guy from la rochelle - where I was able to speak FRench again at last! We had some EUROPEAN pizza and some nice French desserts. yum yum. As you can tell this city is surprisingly international and I would encounter many people who spoke English or even one that studied French at the university :D

So here we have some snapshots 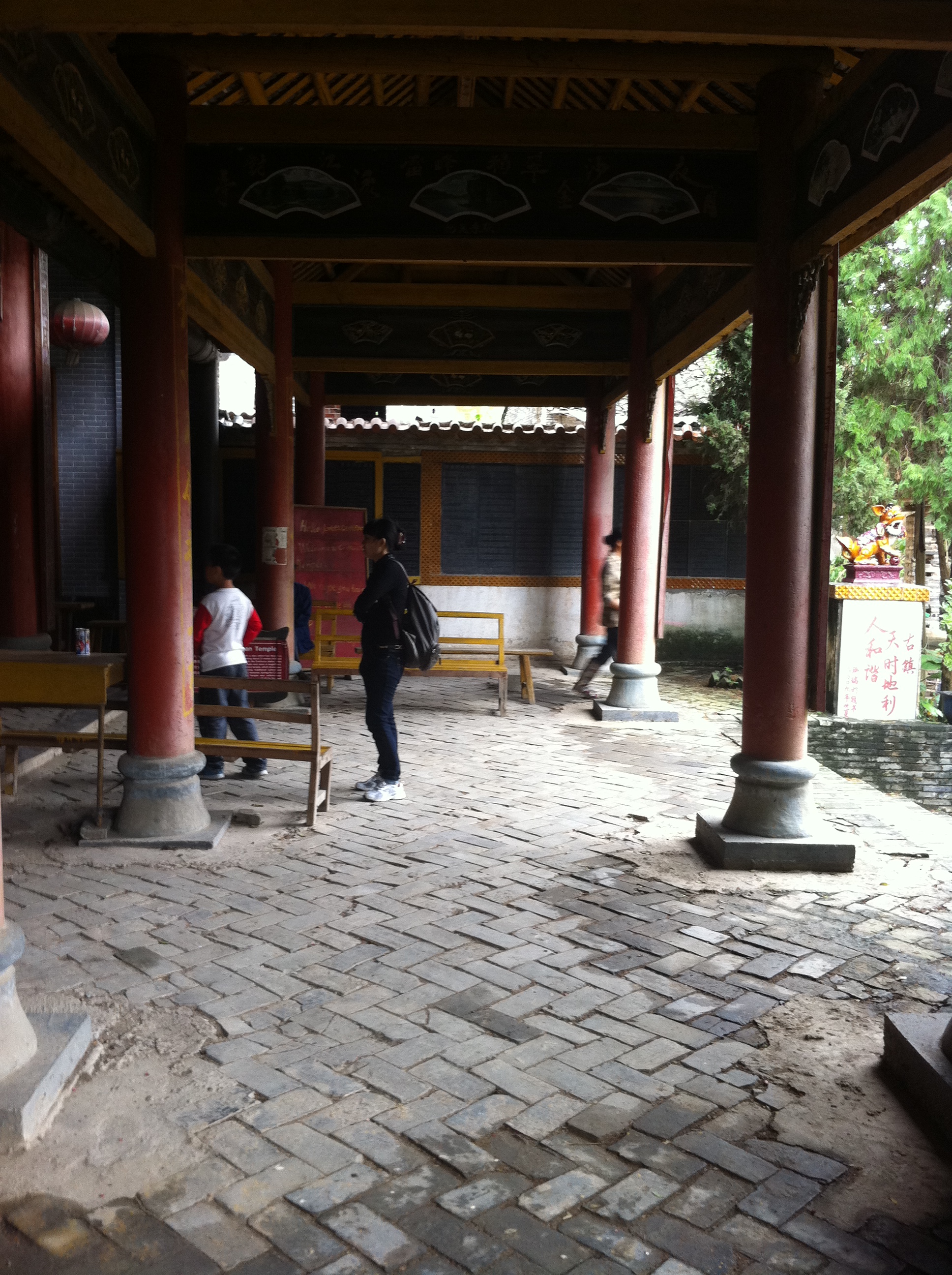 Apparently this temple was dedicated to a female poet whose whose arms and legs were chopped off for some reason...that woman was very well known in the region and is still worshipped by many loyal residents...and no this did not happen recently...apparently a few centuries ago. I also thinkt his story is creepy

In fact they also had a statue of this woman where she had artificial arms and legs...apart from that the temple was destroyed during the cultural revolution - surprise surprise - and restored a few years ago by the people of the village. 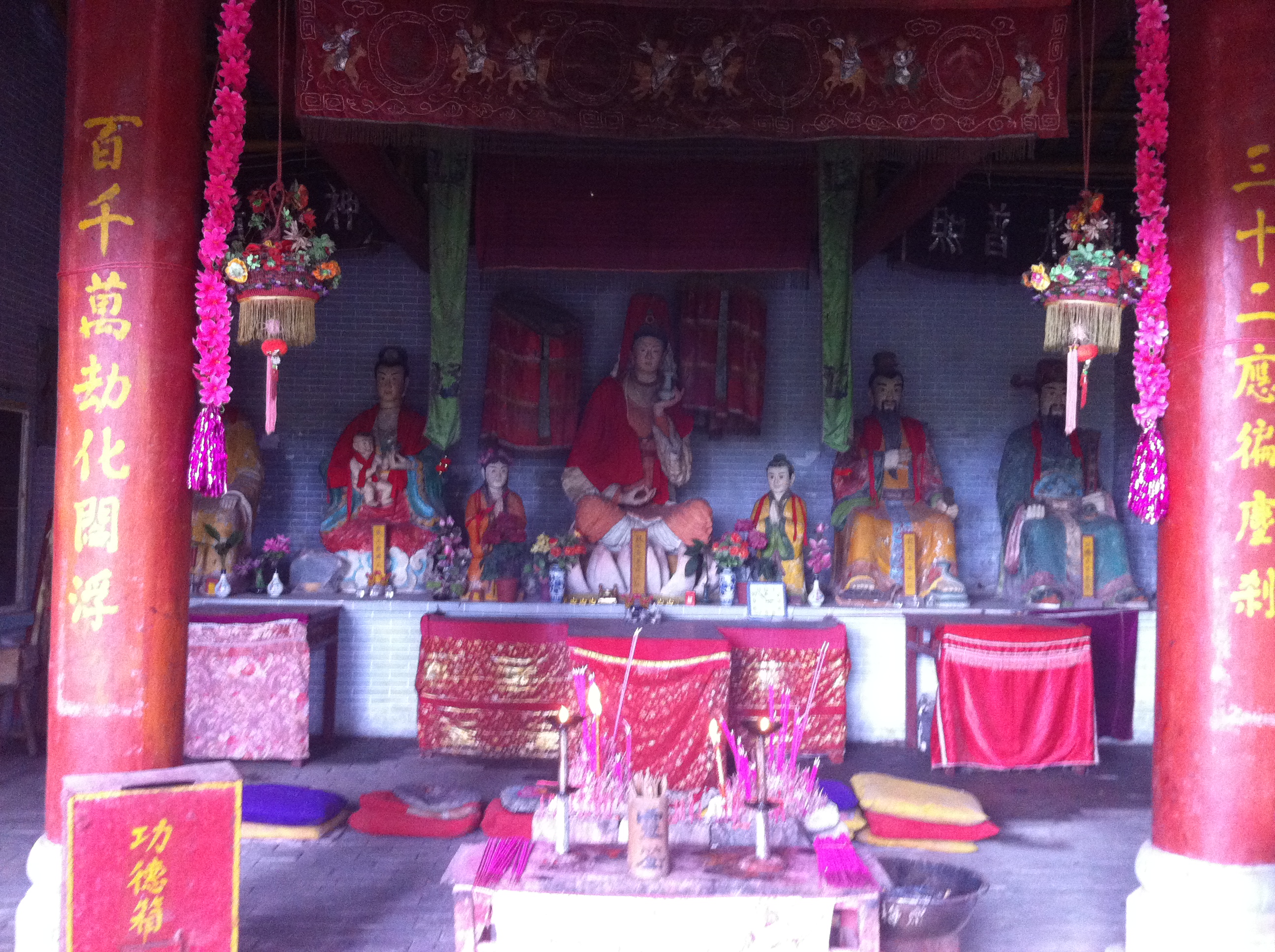 in the middle we have that lady - her arms look strange no? ahh that reminds me they also cut out her eyes...do not ask me why! She wears those red cloths to cover the wounds. 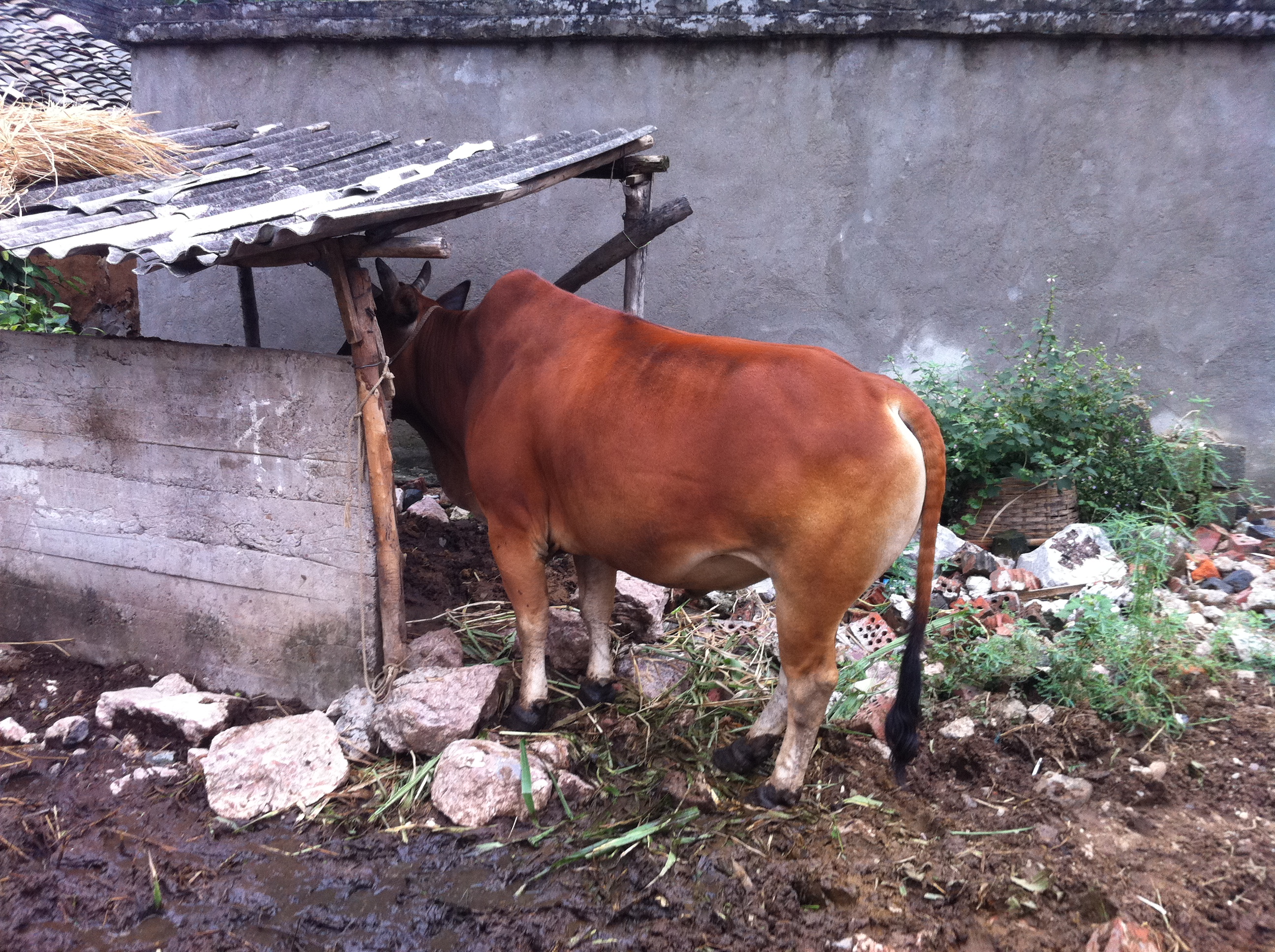 Another more or less close relative of Courtie...far less stylish and talkative though. She should really pay him a visit soon! 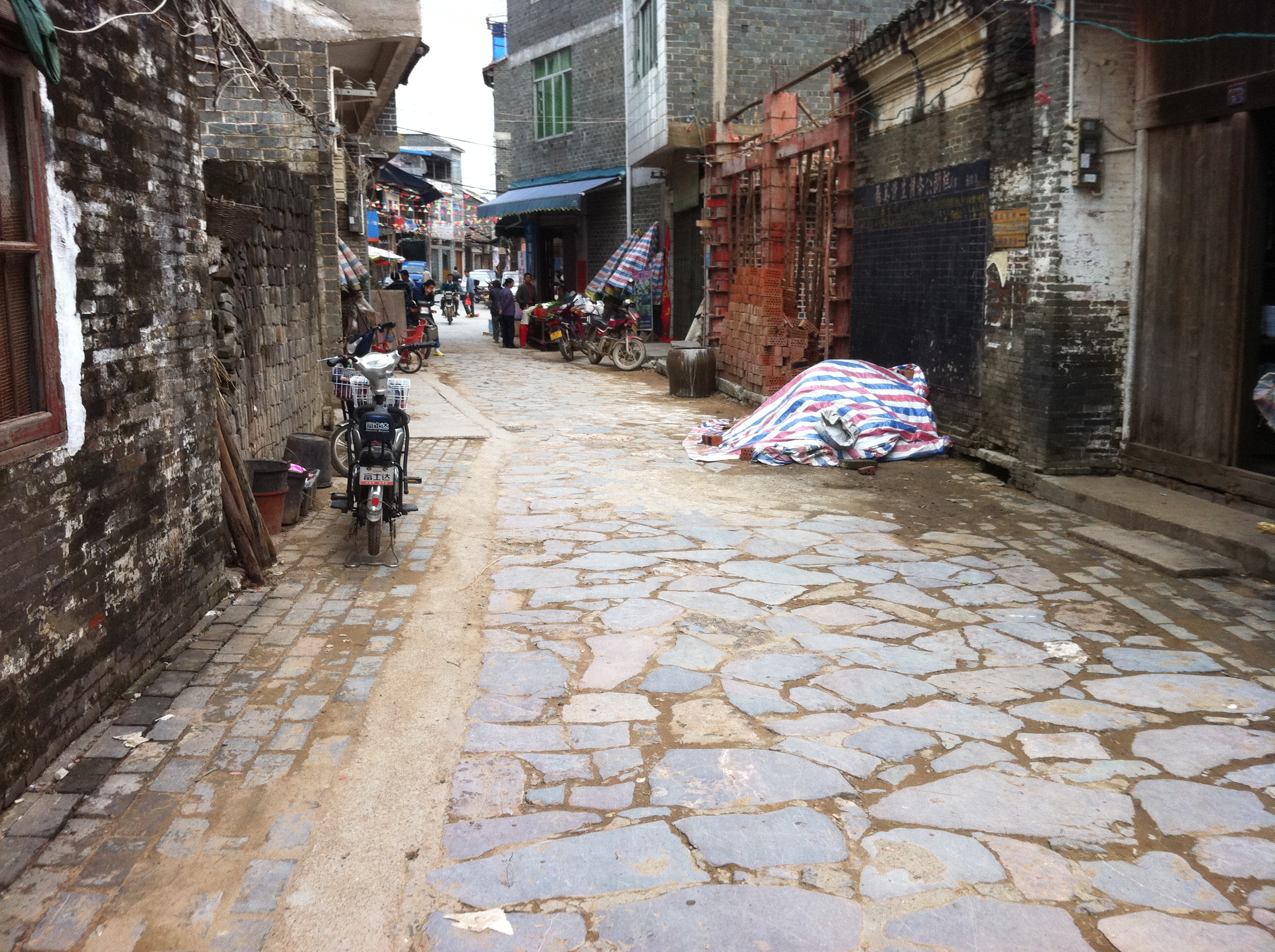 Two examples of a typical cobbled street you will not be able to find in many places anymore. A token of the former empire they were destroyed or removed in most cities and villages...also in Beijing 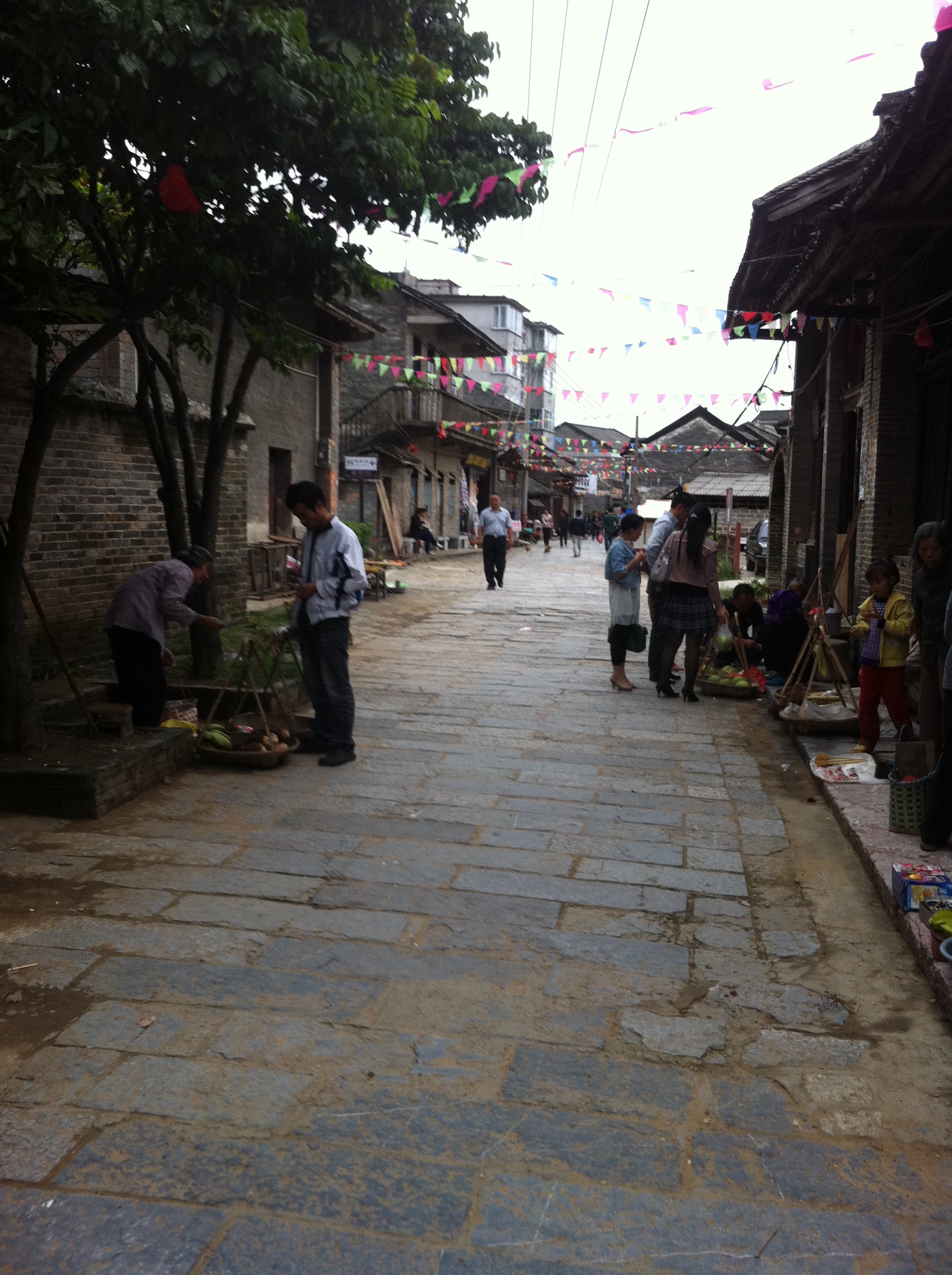 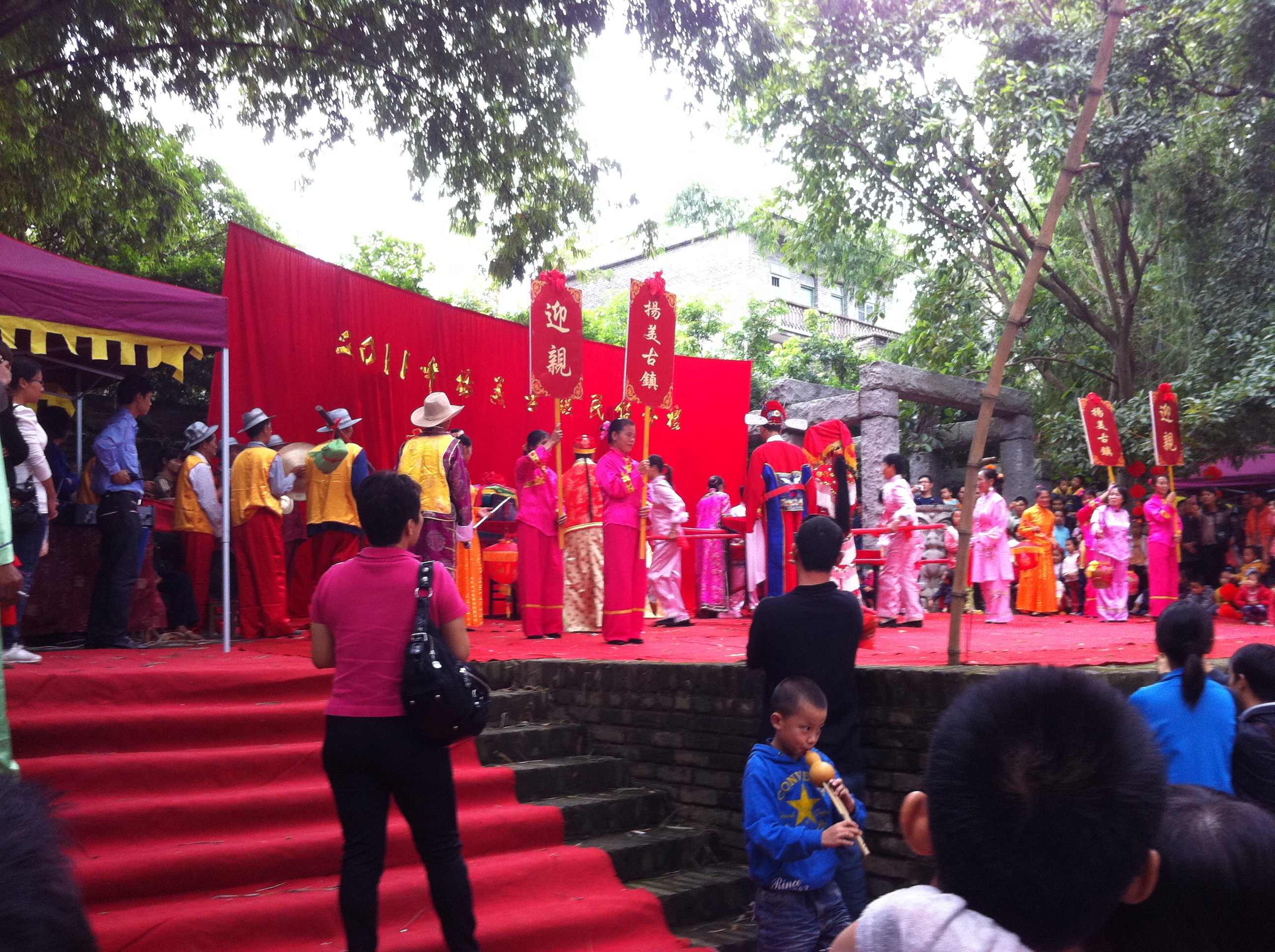 that was noisy but at the same time really nice!! 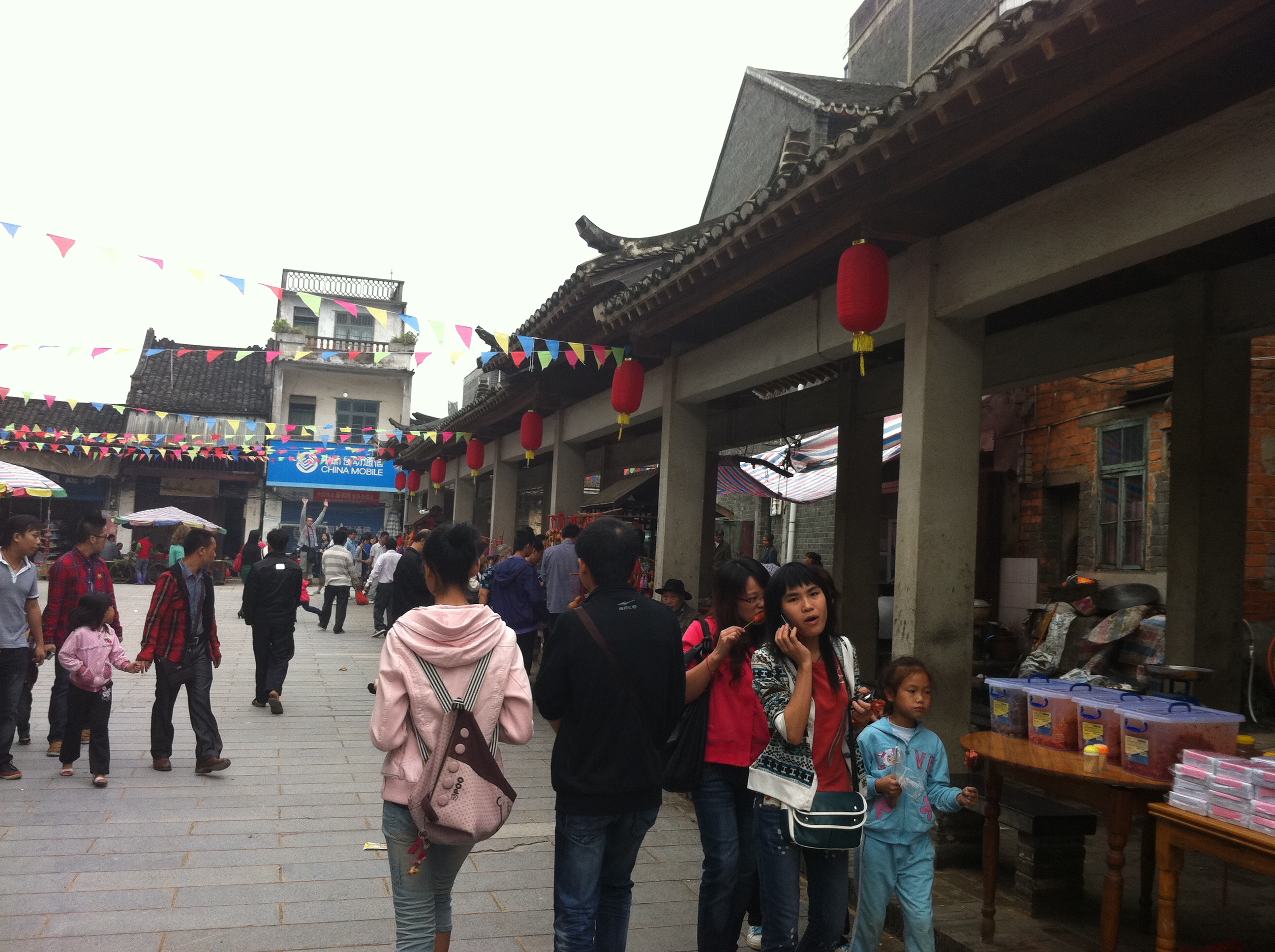 the market of yangmei...with china mobile nearby :D 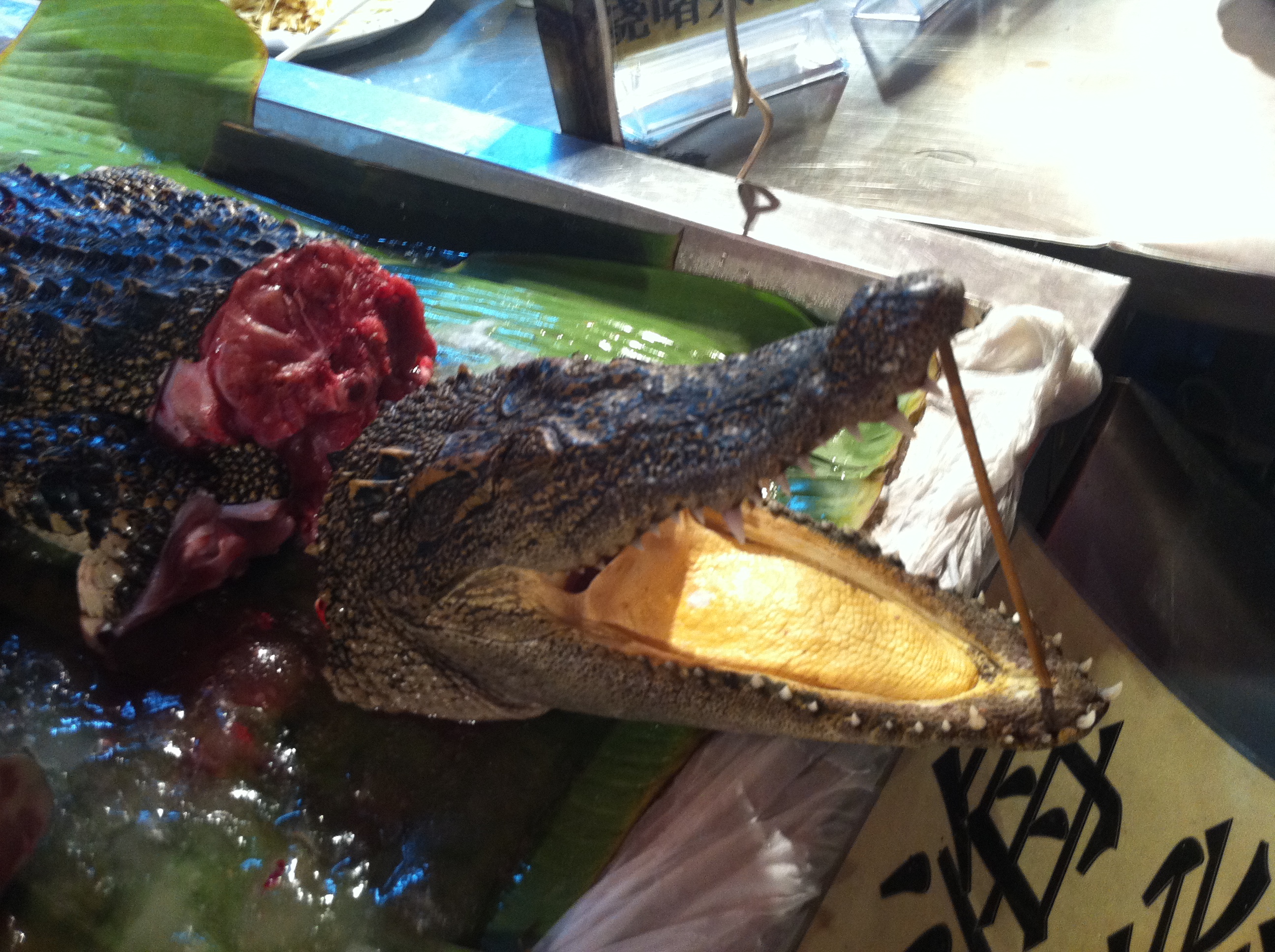 back in Nanning in a street that is reknowed for its delicacies. yes that is a crocodile..and they did chop off its head!

I also got to eat some intestine, liver and liver that i ordered without knowing it :/ The small intestine looked like noodles on the pictures

14 Sep 2011 06:43:46AM @tatiana-dokuchic:
Thanks for the update! I'm looking forward to following you on this wonderful adventure


OMG, MJ, what a experience you are living. I figure out how lonely you feel, i mean, i already found myself alone in another country (it was France, so not that bad). But anyway, its hard to be away of your friends and family. But im sure you'll get used, and learn a lot with this.

Good luck in your journey!


Lady Laville, I'm sorry to read of your harshconditionsyou are living under, but rest assure, there must be some good in this. It's an incredible journey from the life you seem to live in Germany, to you new home, and place. Out of pure kindness, you went to help, and though there may not seem much light now, in time to come, your eyes will be widened, and perhaps you will see, far more, something better than you had imagined. I would love to see pictures!

I wish you all the best.


thank you for your lovely comments, I already feel much better, the first week was just pretty harsh and I missed all my friends in rl and sl. Now that I got my internet its much easier to deal with the situation.

You are right monsieur le duc, It will indeed help me appreciate my life in germany much more. Though I enjoy the experience I also look forward to the day that I return to my hometown and see my family again.


All I can say is, your are such a STRONG lady! I could never imagine! We all love you, and miss you Mj, I do hope you get adjusted!