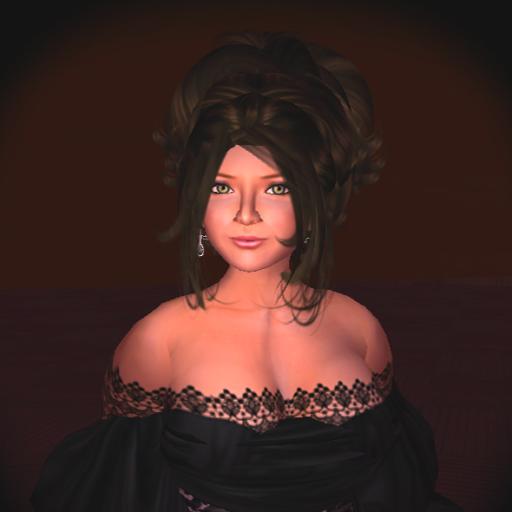 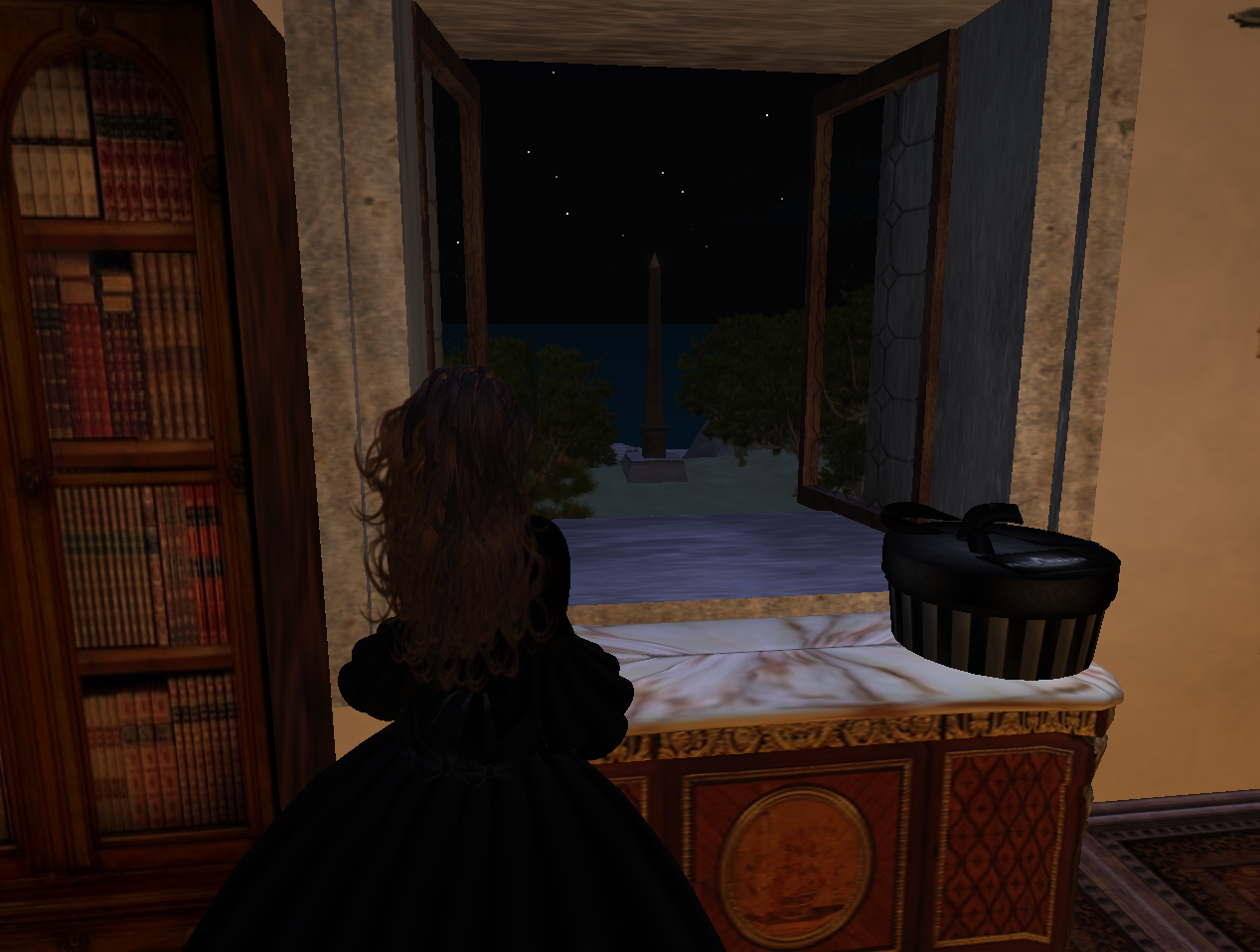 Above: ***La Loredan just before bed, the last night of the move. The view is magnificent and the stars are truly bright in the Meliorian sky, yet one star seems to be absent from the Principality.***

I am certainly one who attempts to plan her time wisely, but surely moving into a new home should not be so lengthy and exhausting as the last few days have been...

God was surely smiling on me the day I hired my new maid, Amalia, just days before I moved into the Villa Vesuviana in Melioria. It must have been a month ago when I had received invitation to be a resident at the villa by His Highness, Prince Elswit- though I must have seemed the fool as I was far too quick to accept. It was an interesting prospect to move from the town, and up onto the hill, with a view of that same hill and town from my bedroom window. A most welcomed surprise, at the least.

All the more reason I should have been prepared for my move, things were organized from furniture to clothing, which would be brought in first, what would go where, how things would be set up. A lesson to all my fellows who in future will change residences: hire someone to measure staircases and hallways. I felt myself pale when I heard one of my daybeds was dropped, thankfully not my mother's, that at least made it intact and unscathed.

Another intriguing fact to this move was that the Contessa Della Torre di Rezzonico... was my neighbor, so to speak. Just down the hall from me was the woman who takes charge over some very fine tailors... and who takes a verbal swing at my family, each and every time she sticks her nose out into the sunlight. A mixed blessing, or fate has a very twisted sense of humor.

The Contessa Rezzonico must have been out, surely someone of her... let's say disposition, would have been quite angry at all the noise being made to heave my furniture into place. Even I was eventually at the site, ordering servants about, even in fact raising my voice. A good first impression to my new home, and those who I shall be sharing it with... Thank Heavens the Prince is in Spain, the last thing I need is for him to hear me shouting down the hall at my servants, and even some of his. How to terrify a prestigious, well-mannered Adonis: an introductory course presented by the enraged Loredan.

Once everything was in place in the rooms, CeeCee was, using the word lightly, kind enough to retrieve some tools to open the fireplace chimney in my bedroom. I was worried soot would get everywhere, just after I had laid my rugs down, but thankfully, Amalia managed it without much fuss. And by the time nightfall came, I had a lovely fire to keep me warm and to keep the room alight. At that point, my hair was down, my jewellery was off, and I felt like a mess. Far too tired to bathe, I collapsed into bed, leaving Amalia and a few other servants to tidy up the rooms and finish putting my clothes and decor where I had specified.

Morning came and I did manage to have my well-needed bath, a relief to say the least to soak in hot water. My brother was kind enough to bring a large bouquet of roses, and a beautiful vase he had made with the portraits of all three of us (myself and both siblings) adorned on it. Though Amalia was late at arriving for breakfast, understandably having slept through the dawn, I did have a lovely meal with my brother. All in all, thinking on it, it was not as horrible a move as I thought it was. It could have been worse, God forbid.

Una Bella Notte! That is the best way to describe the event that can make you proud to be a friend of Venice and Melioria, and to La Contessa Rezzonico. It was mainly a quiet sort of event, fine music and vocals in the background to dance to, wonderful guests of course as the guest list was very strictly invitation-only. The conversation was not of the most abundant but that which was going around was of great interest with anyone with an ear for amusement and laughter.

The Hostess provided us with a gondola to the event just outside the Villa of il Princpe di Melioria, driven by the apprentice gondolier Fiorino. The ride was pleasant, gliding along the moonlit waters around the paradise isle, towards the beautiful location that hosted the event. A pavilion of fine make, decored subtly but finely, and laid out with many foods and wines- the wine was awful of course, it was not of the great make. Vino Loredano is much better, please keep this in mind for next time, Contessa Rezzonico, less you have happier guests who do not have the taste of rot in their mouths throughout the night.

Alas I digress. The event was calm and pleasant, filled with the air of happy and joy, to enjoy a time among friends and family, all those we have grown to love, hate, and love to hate. Those notably well dressed were the Hostess, a man in armor under the alias of Apollo, a man robed in ruby-red Carnevale attire, and a briefly-seen man dressed as a Chinese Emperor. If there was ever a night, that could bring a tear to any Venetian's eye, at the remembrance of a time not so long ago, this was a night and place for it.

I do not do it often, and I do not like to do it, but I salute La Rezzonico and her efforts for the Carnevale fun that was had. It will be remembered for a long time. Una mascherata pi degno di nota. 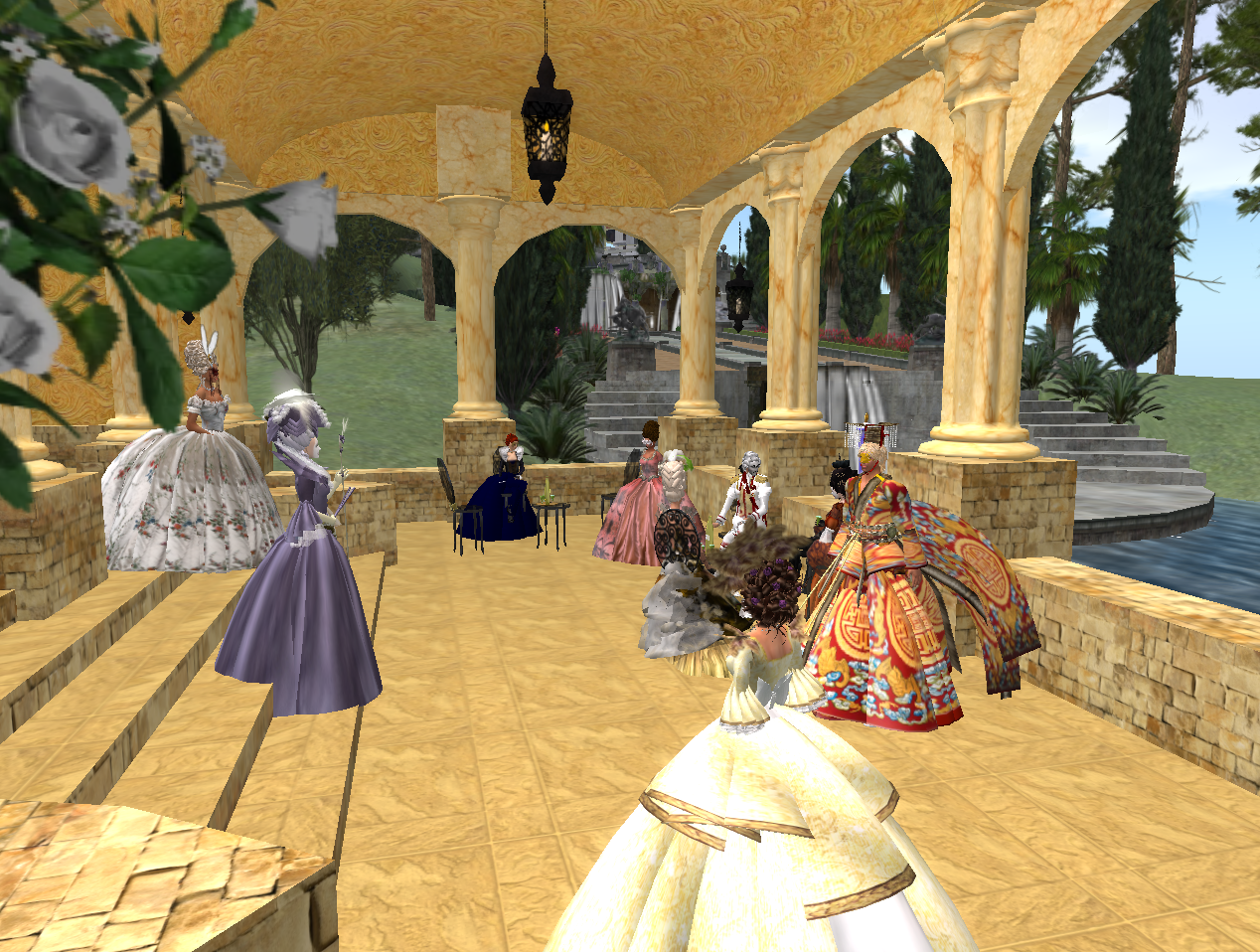 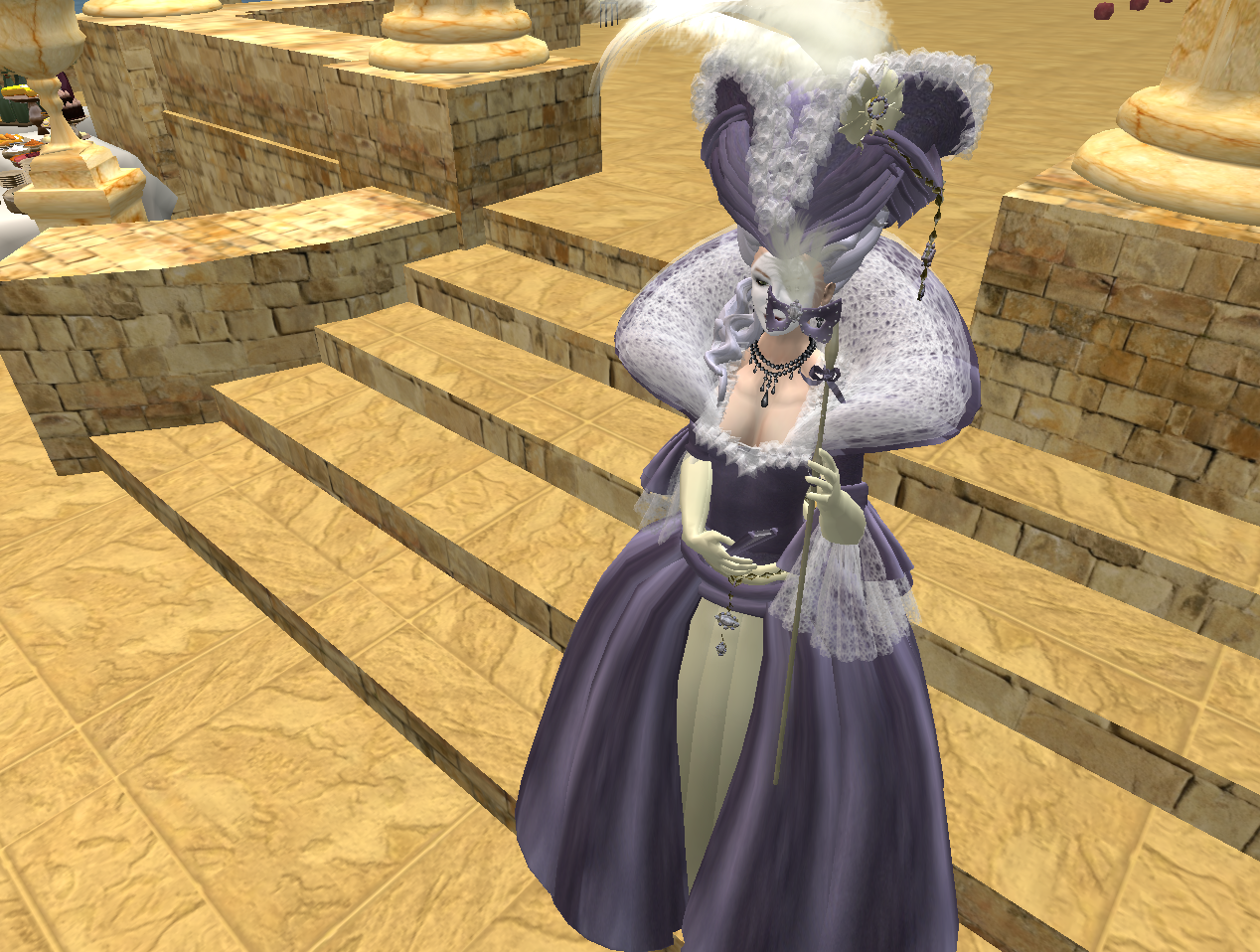 
By Contessa Selina di Loredan, 2010-05-29
I have to say that the Bianco Luccio inn has been far more enjoyable than anticipated. I will be a bit disappointed to leave this evening. The innkeeper has been very kind, he reminds me of a grandfather I never knew. The poor man lost his wife more than a decade ago, and his daughter married some years after the incident. Now his son- whom I have only met once, spends his time sleeping about in his room while his father works. The one time I did meet the son, he was barely awake, practically tripping over air as he stumbled through the hazy world of daylight. I half-expected the innkeeper to offer his son to me as a husband, but it would seem that there is some bad blood between the two, and he is unable to even jest about his son now.


Bastia, to say the least, is uneventful, but the people are incredibly polite. I stepped back from a market stall and bumped into a woman, but it was she who apologized. Strange people. I purchased a scarf at one of the shops, it's very soft but too warm to wear even in the hot weather. It has been good to use to keep the draft off my neck at the inn while I sleep though. I can guess it was not woven from the finest of threads, the craftsmanship would be laughed at in Veneto, so even I am a bit dazzled that I even bought it.

The docks are probably the most impressive spectacle to witness in this city. The entire pier is made of wood however it is so well kept I would think it was rebuilt every year. I heard from the innkeeper that many ships stop briefly at Bastia for any needed repairs and supplies, mostly French and Spanish ships who do not wish to mettle with the larger Italian cities.

I have already sent word to aunt Franca, so perhaps I will be lucky enough to receive a Loredan welcome. As well, thinking about Bastia, aunt Franca, and the Loredani tradelines... I have been wondering about the family in general. It seems Venezia is the only place besides Genoa where the Loredani are so organized, in terms of having a head of the family. Those in Spain, France, Britain, the Greek Isles, the Germanics, Russia, the Ottomans... they seem to be like... strays almost. The Genoese Loredani however, I feel are more brethren than all the rest,

I suppose I am not quite so sad to leave Bastia, as I have family to look forward to. And the prospect of a new trade agreement.
Posted in: default | 1 comments

Aboard the barquentine vessel, the Pio San Matteo, with only a few guards to keep the restless sailors at bay, I felt myself at an unease. I was traveling from Valencia to Liguria hoping that Genoese trade might be much more fruitful than that from Spain. One would assume that such a short voyage would go without much hassle or obstacle, but of course, all-loving God must have a sense of humor. Halfway into the sailing, in the dark of night, a terrible storm brewed. I am most certain that the sailors have dealt with much worse, but seeing as in this case there was a woman on board, namely myself, they decided it be prudent to throw me overboard.

Of course it is easy to imagine I wasn't very pleased at the sailors' demand to my person being thrown to the waters. It was my six mercenary guards against perhaps twenty or more of them. Suffice to say I locked myself in my cabin whilst my mercenaries turned the sailors into mince meat.. Though I must note that I need to send word to the family of one of the men, as he did not meet kindly with a sailor's pistol. Oh well, one less mercenary to pay at the least.

Now while my men are brilliant guardsmen, I did not really expect any of them to be capable sailors. If we were not so close to Corsica, I would fear being adrift for days... Heaven forbid that occur.

Now I find myself stranded in the city of Bastia for the next few days. The attitude here is different than I expected. While the Loredani family is well known in Liguria, I did not expect them to be aware of my family here. I must make a note of the Bianco Leccio inn, as in this... less developed area of Europa, it is a haven for some slight luxury. Most fortunately, the innkeeper knows my great aunt Franca who apparently is a frequent vacationer here. While I have only met dear aunt Franca only once as a child, I have heard much about her, she is only married into the Loredani family- and is widowed to boot.

I don't recall uncle Alvise being a very kind man, most likely aunt Franca murdered him. I like aunt Franca a bit more now.