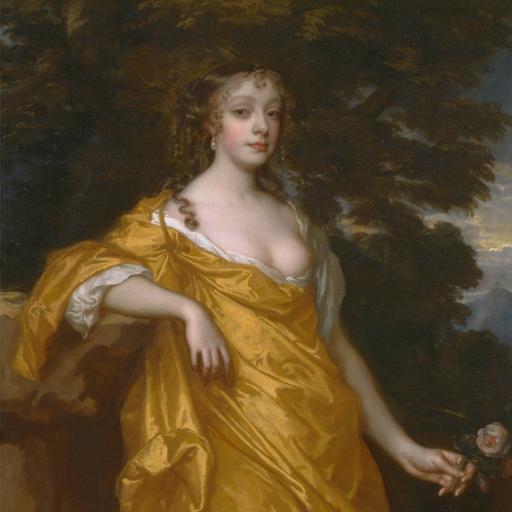 Letter from Whitehall to Carterhaugh, Scotland

Youve no idea how fortunate you are to be in Scotland! Though the King and Queen have returned from Oxford after a stint at Hampton Court, a few plague deaths have occurred though nowhere near Whitehall. Our prayers have been answered! The Queen is with child, the King struts like a peacock, and England rejoices.

All but Lady Castlemaine. My maid Sally reported that Castlemaines maid said that Barbara came home from the Carnival Ball in a rage over the news and broke several vases by smashing them in her fireplace. It was an otherwise delightful evening, with the King and Queen in high spirits, and the appearance of a pleasingly impertinent player from His Majestys Theatre named Nell Gwyn.

Castlemaines nose has been out of joint ever since Frances Stuart declined to stay under her wing and sought her own position as Lady of the Bedchamber. No, la Belle Stuart remains the flowerbud she was as when she arrived here, and the King still seems quite incapable of taking the bloom from the rose.

In a way, I rather admire le petit Frances for her principle, though my distinct impression is that she is most disinterested in intimacy and squeamish about it, judging from her behavior during her courses and the headaches she so often pleads. And it is ever so amusing to see the King depart her chambers without having been disordered.

Court has been busy of late, as the Queen returned from Oxford in the same good spirits usually reserved for the King. She is happy, hums to herself, dresses in a decidedly English manner, forgoing her dowdy Spanish gowns, and shops at the Royal Exchange often. She also holds more dinners and attends many Court functions.

The Queen is not, however, amused by the writings of John Wilmot, Earl of Rochester, and who can blame her? They are so far beyond bawdy as to be offensive to the King, though I do admit to appreciating it when he points his pen at Lady Castlemaine. Rochester and the King have been ever so friendly of late and I believe he seeks a position. If so, we shall all sleep with guards at our chamber doors, for his carnal appetite is prodigious.

Stephen remains at sea with no word, and given the recent Dutch offense, this is worrisome. I do not like to dwell on these dark thoughts, though, and seek to keep myself busy taking the Lady Elizabeth Malet as a ward from her stepfather Sir John Warre. This young lady is quite the heiress, and I intend to see she is given a place of distinction in Court and do not mind confiding that her stepfather will pay handsomely for a good match. There could be much at stake here!

It is still cold and will be so for a while, yet as the weather warms and snows melt, I think of visiting you at Carterhaugh. Perhaps by the time you receive this, I will be there!

As the Page of his Majesty's Bed-Chamber and Keeper of his Private Closet, I am compelled to write and inform you and Mrs. Chiffinch of current events in Whitehall until such time as you return here with the King. Please do let all know no new plague deaths have been reported in the City for two weeks now and we are so anxious for His Majestys return!

However, I believed it of interest to you that Lady Castlemaine arrived back in Whitehall early from Hampton Court with Queen Catherine. She is mightily playing in her role as the Queens Lady Of The Bedchamber, and she is taking great liberties in His Majestys absence. I have seen her whispering to the young Duke of Monmouth and watching him walking from her chambers like cock of the walk. The people do look askance at the Royal Whore and with Whitehall still so bare after the Plague, her antics are much discussed.

William, you and I share a few secrets ourselves, and I will always be grateful to your and Mrs. Chiffinchs discretion in those years regarding my own dalliances with the King during my years as an actress. I regard my own position as the Queens confidante with pride, and a result of not only the Kings but your trust too.

Letter to Carterhaugh from Whitehall, April

It seems months since I have written, but a lifetime of events have occurred since! First, Stephen arrived home unhurt at the end of March after that skirmish with the Dutch. He surprised me by showing up at the Banqueting House during the Gods and Goddesses Ball and took me in his arms. A lovely end to the evening.

For me, at least. Our dear Queen Catherine lost the baby she has so hoped for and then her mother died, so we all donned more somber colors in mourning. I took private pleasure in seeing how lovely and fresh Mrs. Frances Stuart looked and how pale and unkempt Lady Castlemaine looked without her paint and powder.

Whitehall in spring blooms with intrigue and new arrivals. The Duke and Duchess of Hamilton have come to stay in the palace, and the Queen Mother has also come to visit her son, I presume. At a recent gathering, she took ill and was quickly attended in the Queen's chambers. Upon recovering, she blamed the Protestants for her illness

I fear my ward Elizabeth Malet may soon be remanded back to her stepfather, as she has fallen in with bad company, namely John Wilmot, the Earl of Rochester. I know that she sneaks about with him though she demurs in acknowledging it. Too many people have informed me otherwise, though I have yet to mention it to Stephen. He already thinks poorly of Rochester.

On a brighter note, Stephen also returned with trunks and crates of glorious fabric taken from a Dutch ship. Our dressmakers have been busy creating gorgeous gowns, styled with elements of French, Italian, and Dutch design, all to create a very English look in our Court! Naturally, I get my pick of them first, but I also offer them to the Queen and Frances too.

Stephen has been down to the docks and Whitehall every day this week and I fear it means he will be returning to sea shortly. He speaks of us sailing to Ireland to assess his family's landholdings the King restored when he was made Earl, but I've no desire to leave London anytime soon, especially with the King's birthday celebration on 21 May.

Now, for the news I have not even hinted at, but eager to reveal: Castlemaine is banished! She angered the King over a matter I do not know of, but it was enough for him to order her to her husband's country estate for an indefinite period! Perhaps I am too giddy, as I myself was sent from Court for a few days for publicly posting a rude verse about Castlemaine by that Rochester, but that has subsided in the wake of her breach with the King.

I must close, Rose dearest. I long to see you soon!