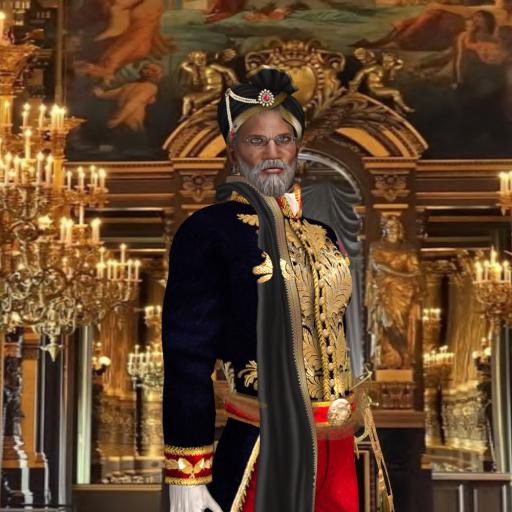 The Other 18th Century: A Visit to the Barbary Coast


Sir Mansur Marawi – nay, Sir Mansur Marawi Pasha , now -- steeples his hands over a broad swath of black linen caftan. He inclines his head in a seated imitation of the courteous bow he had previously offered you.

You find yourself in a palace. From the harem room above, the loud peel of an infant's cry echoes over intricately paneled walls. In the back of the room, a drape of patterned silk wafts invitingly. The shadowed corridor beyond must lead to a kitchen; you can tell by the ever flowing aroma of falafel, shwarma, and shish kabob. You hear the jingle of bells, the coarse laughter of corsairs. Once, muffled, the walls shake with what might be an explosion or could be the clatter of a large skillet falling to the floor. Your nostrils flare subtly. Is that sulfur in the air?

Mansur's only reaction from his seat upon a high-backed, velvet upholstered throne is to cross a wooden leg over another of flesh and bone. No one else in the parlor seems much discomfited by events beyond the curtain. Guards, guests, officials, and a child or two bustle about on their way to or from various duties. Some even stop to take refreshment alongside you, to lounge about the comfortably appointed sofas and chairs, to chat, to rest, to sip the tea that flows like water while servants ferry plates laden with cheese and dates.

Your portion of this fare is served by a cheery female with shorn locks of black, springy hair. She glides with the self assurance of a princess despite the blue silks and jeweled collar that mark her as a slave. She slides to her master's side, kneeling, and you feel a curious prickle at the nape of your neck. Every time you look up, the woman's blind, clouded eyes are respectfully averted. But you feel her gaze; it follows you like a shadow.

"My friend, you have my sincere apologies," Mansur says at last. He brings a falafel ball to his mouth and chews thoughtfully. "I have been remiss, I think, in putting off our visit for so long. How do you find our city?"

The year is 178x, but it is not the 178x with which you are so intimately acquainted. This is a different 18th century, a new perspective on the world you knew, and your lungs cramp with the desire to be home.

For some, this strange place is home, and you recall it sharply when a petite woman, obviously breeding, sidles up along the other side of Mansur. Her eyes are bright and merry. Her long black hair, subtly streaked with gray, hangs loose over a modest blue gown. For all of that, she wears a scimitar in a belt slung low beneath her belly.

"Salaam, Brute. Who is your friend?" this woman asks, giggling, as she plops into Mansur's lap.

The slave on the floor huffs indignantly at the two scarred feet that now dangle in the general vicinity of her earlobe. "Mistress. Salaam," she says.

The pasha's lips twitch in a mixture of annoyance and amusement and you are not surprised when he introduces the impertinent minx as his wife.

" You have been too busy to receive visitors, I wager,” you remark with a fleeting glance toward the wife's blooming belly.

Mansur shrugs. "I have many claims on my time. The recent fires come to mind -- and those Russians in my harbor. Tell me, would you like a tour of the new constructions?"

We would love to take part in cross-sim rp and to join the other 18 th century role playing communities in Second Life and beyond. It is our supreme pleasure to meet and mingle with those from other rp environments within our period. Please let me know if you would like to send or receive an official ambassador or delegation.