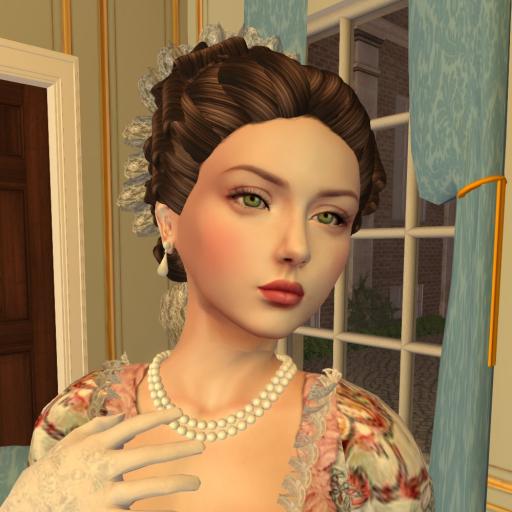 Re-Acquaintences
According to the young and naive Mlle Noailles (daughter of Mme Etiquette, I doubt she'll be impressed if she reads this, but anyway) , the new Venetian Ambassador, Msr. le Conte Loredan.. has some past acquaintence with the Mqse. d'Andelot. He also likes to flaunt this fact in front of the Mqs! Then of course, the Mqs goes on to mention how clever his wife is.. apparently her tongue has been down so many throats it's learnt six languages on it's own..

To the Dogs
While having tea with my friends, I was re-acquainted with the Princesse de Chambord. When I arrived at the table, it seems that she refused to stand in my presence, and then commented on how I was rude because I would not sit down. She then also went on to compare my manners to my dogs. One is not amused.

Prince Etranger
While having evening tea, it seems that protocol has turned against us. The Russia Prince Anton refused to sit, thus leaving the Marquise de Fiennes standing, when she was obviously fatigued. Naturally, she may not sit while a higher rank is standing. But once I pointed out that Monsieur Anton is a Prince Etranger, this enabled her to sit down, and only after she was seated, did he decide to sit down himself!

Madame Cagliostro?
It seems Monsieur le Comte de Cagliostro (Dracula) has found a bride (Not the Bride of Frankenstein, that's another story, but anyway), he has recently went from flaunting the fact that he was a bachelor to flaunting his new wife.. who we think may be a a vampire too.. her complexion is far to fabulous... And! While on travels in Rome.. he left her! For the Italian vice.. no doubt..

After recording the events of the week in my notepad, I have had many requests to divulge what has been written. So, here it goes, and not all of it is pleasant :P

Extra-Marital Fondling
While at the opera in Languedoc, I caught Her Royal Highness the Comtesse d'Artois with a handsome gentleman, though not her husband. Naturally, I paid no attention to the opera, though I heard it was very good. Though it is widely known about the Comte's liaisons with the Dauphine, it seems that Mme la Comtesse is having an affair of her own now. Maman finds this fascinating also, as she attended the opera with me.

Lesbionic Liaisons
At the English Spring Ball, held at the Buckingham House in London, Her Highness the Princesse de Lamballe was caught dancing with another lady. We already know of Mme la Princesse'ss ill taste for men due to her frequent correspondances with the Dauphine, but it seems her taste has now turned elsewhere. The name of this english lady is unknown, I must write to G. to have her keep a look out.

Sexual Harassment
While having tea today on the parterre, an unusual Russian gentleman, with no wig on, decided to perch himself on to the lap of Msr le Prince de Carpgne. Naturally the Prince was not amused, and what made the situation worse was the fact that this gentleman refused to even acknowledge the Cmt. de Provence, much to his dismay.

Paranormal Activity
While pondering on Msr. le Conte Cagliostro's secret to a pale complexion, he chose to reveal to us that he was in fact.. a vampire. Naturally at this point I fainted, and awoke to find him discussing with the Cmt. de Provence that he has sold his soul to some randomer. I of course have already sold my soul to the devil for the knowledge of all things fabulous, but I do believe he has took it to the extreme merely to acquire pale skin.

Attempted Fondling
Meanwhile, when I fainted, I was awoken by the Pr. de Carpgne, who was feeling my bosom! Naturally I was not amused, and Mme. Etiquette gave him a right scolding. He seems to be after the notepad that I am writing in at present. God knows what would happen if he knew what I have wrote in here. Page 7 is of particular interest as you know...