BrainRain about RP's economy - (not yet a storm!) 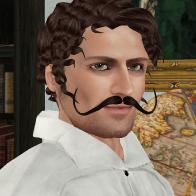 Building on the occasion of the new version RPS hud (3.0) and its exciting new features, I like to share some ideas about the development of the RPs economy in the Duchy and if possible encorauge all the Duchy designers and scripters to make a group to working together and make possible a compatible system of 18 century trade and goods based in this excellent system.

The ideas that I'm going to expose are not very original - in fact the concept are very simple - and i think that are 'flowing in the atmosphere'. Some time ago I talk with Tatiana about similar concepts - and I'm sure that this is part of the general idea that move the Duchy development latest times. In other sims - like Antiquity - are working in similar concepts too , althoug they are more based in a naval trade economy (lots of sail water there) and we have more land here. My main intention with these discussion is try to reach a common start point where all people that want to make rp items in the Duchy have the same direction and - the most important - our items will be compatible between them!!!

Well, the idea is simple- to develop a basic economy that works -and atract people to work on it i thikn we need some basic things:

* Raw materials: the most basic step must be - as in RL - the extracting activities of raw materials. The Duchy have beautiful places that are full of raw materials ready to be collected (only need a few scripts to do it

I think that - like in the rl again - we could have diferent and far places specialized in some materials - so the transport could be a important part in rp later. Wood in the forests, grain in the fields, meat - I saw that we have cows and pigs now too

- With simple scripts in the right places we could make that people that spend some time there could extract these items and could sell later to the next step in the chain.

*manufacture items: Ofcourse, the next step - here people could combine raw materials - or only use in the right place to transform it and ovtain a new one. We have - thanks to our wonderful landowners Duc, Skye and Tat again!! - manufacture places ready to script too

the mill, the blacksmith... Here only need - and i think is not complex neither -I made some tries that works fine - objects that let us - with more or less complex actions - work with these items and produce later a finished diferent new item. Here i tihnk that must be important two points:

1. Items in RP must be all perishable. So use spend them and people need to renew form time to time. We need ideas about items that could be useful for rp itself - food is a easy example - drinks too, could be some luxury items that could be produced and needed in noble houses...

2. All these activities, extractive, manufacture, transporting.... must be rp scripted ofcourse and you need spend your energy in them -with them you advance in your skills too ofcourse. So you need to eat and drink later to recover, and this close the circle and make that the system works. You have necesities that need produce items that - need raw materials and all works and spend items happily

So - and back to my main proposal - we need a common rules to develop. I can sculpt, texture and script a tree to cut and extract wood but we need to have a comon code that lets you use later this wood in the next step - that could be make by other people ofcourse.

I think that this system is very good too to encorauge the play and most important, people without design or script knowings could have its own rp bussiness using the machines or tools made by others, but producing their own RP products. Depending the complexity of the tool, you can let that people customize their products too - think that is easy to add a script that lets you add your own texture, for example with your personal label. But for this we need to work first in the basics.... this could be the future.

Thank for your attention, I hope this could be interesting for you!