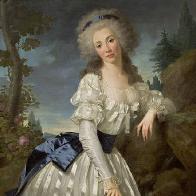 Elisabeth Christine was born in Wolfenbttel in 1715 and died in Berlin in 1797. She was married to Frederick II in 1733. After his failed attempt to flee his fathers tyrannical regime King Frederick William I ordered this political marriage. It was well known that Frederick II resented this marriage and only agreed to it to regain his freedom. At first Queen Sophie Dorothea had had a her own plans of marriage between Prussian and British heirs so the only ally Elisabeth Christine found at the Berlin Court was Frederick William 1 which consequently did not endear her to her new husband as Frederick II hated his father. However, Frederick was shrewd enough to use this to get himself favours like money and travel permits during the first few years of their marriage.

When Frederick became King he granted Elisabeth Christine Schnhausen Palace has a summer residence and state apartments in the Royal Palace next to his own. However, unless it was for a formal event where they would have to appear together the King largely ignored his wife. After Sanssouci was built Frederick moved away to Potsdam and visited Berlin rarely. As result it fell on Elisabeth to host social activities for the courtiers. In fact the King relied on her to take care of the social side of court so he did not have to bother with such things.

Elisabeth held many social activities like concerts, dinners, operas and while she may not have known how to entertain large parties her Reception Days, held weekly, were popular because the King did not hold his own. She eventually started to receive ambassadors, royal princes, generals, ministers and nobility on behalf of the King. During his Birthday celebrations she even received congratulations on behalf of him as well because Frederick did not bother to show up to some. As a result Schnhausen Palace became an important site both socially and politically for the Berlin Court Society and was regularly visited by all members of the royal family, except the King. When he did show up he would only stay for a short time. Despite the Kings coolness towards her she did send him fruit from her garden regularly and he in turn demanded that everyone give her respect as a Queen.

However, even though Elisabeth appeared to preside over the social scene with apparent approval of the King, his continued absence caused her problems. The other members of the royal family had their own households and without a strong central court these became minor courts and caused tension for Elisabeths. This was partly thought to be because of Elizabeths own character, that had trouble asserting authority and seemed to inspire pity rather than respect. One of her own dames of honor always referred to her as the Poor Queen. The lack of authority led to a marked decline in etiquette at Court where members were often bickering. Once the Royal Opera Singers flatly refused to sing for one of her events and she had to appeal to the King to assist her. Elisabeth was interested in religion so she enjoyed inviting theologians to Schnhausen.

Her sister Louise Amalie was married to Fredericks brother Augustus William of Prussia. Louise Amalie too was excluded humiliatingly by her husband Augustus. The two sisters were rather close because of their unhappy marriages.

**This was summarized from a chapter in the book Queenship in Europe 1660-1815: The Role of the Consort edited by Clarissa Campbell Orr

You can read most that chapter in Google Books!