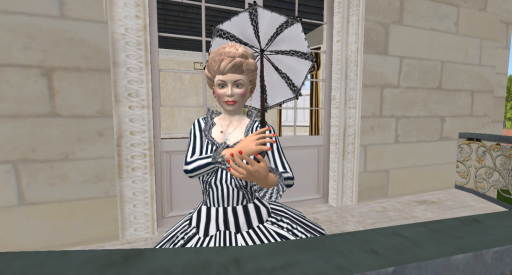 My work on the large mirror order is going well and is keeping the shop very busy. We delivered the order and on its heels received another large order. Apparantly our patron's friends adored our work and several wanted their own pieces immediately! Mon Pere is obviously very pleased with the amount of business nor can I complain about these types sucesses.

This is wonderful for business but I fear it will keep me away from my personal work at the Academie de Science for up to another fortnight. I do long to return to my work there and the new friends that I have made. I feel like Fenn and I where just starting to settle in at the Languedoc Couer when work called us away. I have heard that several new shops have opened and there have been many intrigueing soires I have missed.

I am particullarly intrigued by a letter forwarded to me from a M. Adventure, an Englishman apparently interested in optiks and work at the Academie in general. I was amused that the letter was addressed to Fenn instead of myself. This is such a common oversight it has long since ceased to irratate me. I shall forever be thankful that mon Pere did not see a woman's minds as a limitation and that he in fact sees women's ability to pay attention to detail as an asset. The Italian glassmaster of our shop, who has now trained many of our French workers, in fact complimented me specifically for my talents this week. He stated that it is my attention to detail that makes me an equal to any of his best pupils with many more years of experience than I. I also feel priveledged that the Academie also values the wit and intelligence of women equally to men. I have met so many witty ladies in the Duche. I wonder how the English ladies are treated that M. Adventure would make such an oversight?

I received and urgent letter from Pere today. The optiks house has received an order for several large luxary mirrors by a very notable aristocrat, he won't tell me who, but the delivery is a very short time table to support a planned soire of some nature. He is in need of my skills in mirror making and design and Fenn's in management of the workers to be able to meet this production deadline. I expect this will keep me occupied and away from Langeudoc for up to a fortnight. I am pleased to help Papa with such excellent, and profitable work, but I am naturally disapointed that I will not be able to pursue my own studies for a time at the Academie. I sense I am on the brink of new insights into the working of my adjustable mirror but that shall have to wait. It is the profits from these large jobs that allows my scientific endevours to be possible after all Fenn and I shall pack and leave tomorrow.


By Evie Alchemi, 2010-01-28
Cher Journal,I have at last been formally accepted into the Academie of Science and Pierre has arrived at last with my precious crates! I was even more fortunate that Duc Panacek himself was at the academie when the cargo arrived. He expressed great interest in my work and I was very pleased to be so kindly received. I pray I can live up the expectations of so many great minds!I have already started unpacking, and although I've held my breath as we pried open each box thus far everything seems undamaged. At very least le Comte de Buffon's model mirror is intact which is the most precious thing to me of all of my experiments!- Evie
Posted in: default | 2 comments


By Evie Alchemi, 2010-01-23
Cher Journal,I received a disappointing letter from Pierre today. The snow and unusually hard freezes recently have sadly left the roads in poor condition with deep ruts that is forcing the cart to move very slowly so as not to crack a wheel. I was a little concerned about this possibility when Fenn and I rode back to the Langeudoc. While the weather was fair and allowed for brisk horseback I did note that roads have suffered deeply. He reports news of many carriage accidents and will take it slow so as not to risk my precious optiks. Pierre had further ill luck as the horse threw a shoe and he lost a full day getting to village with ferrier. He estimates it will be mid-week before he can reach us. I must be patient and hope for the best!- Evie
Posted in: default | 0 comments


By Evie Alchemi, 2010-01-19
Cher Journal,I watched with care today as my optics tool were packed from my small workshop at the back of the mirror production house to be shipped to my new lab at the Academie of Science in Languedoc. Everything was packed with the usual care and handling I've come to expect from Pierre. I was pleased to find a time with good weather when father didn't have him shipping any new mirrors or goods to Paris this week and he even gave Fenn and I the family discount to ship my supplies! The lenses and tools are fairly hardy to pack and I will purchase tables and other general items from the well reputed shops in the Languedoc. I mostly wanted to personally oversee that the special mirror we are working on for le Comte de Buffon was packed carefully. The polish on the metal is very fine and it would be truly regrettable to scratch it at this stage of development. Fenn is working on new, finer pitched, adjustment screws for it as the trial one we have worked on do not have the range that I would like for this detailed work.Pierre said that the carts should arrive on Sunday so Fenn and I will have enough time to leisurely make it back to the Languedoc. I have my eye a lab on the second floor with closing doors and no fireplace. This should create a constant stable environment for my work without extra heat or air current (I must verify this hypothesis more later as I think it does affect the quality and variability of our finer products). There are some details I must still work out with the Duc regarding the lab but I hope that shall go smoothly. I do hope that my work will attract a patron or at least those interested in our other fine glass products as the membership fees for use of the Academie are going to be challenging for us bourgeoisie but I am certain the effort will be rewarding.- Evie
Posted in: default | 1 comments